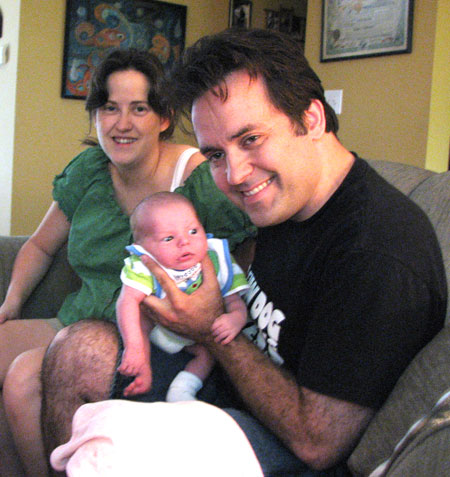 After many years of planning, a new chapter has begun in my life. Hopefully it will be a long one.

1. Why did you name him Owen Edward Warner?

Owen is a name we both like and about which we have no negative associations. This is no small feat when starting your family in your thirties. Owen is also the name of my maternal grand-uncle, and Edward is my maternal grandfather’s middle name.

My mom is doing fine. She’s very excited and wants to know when Owen will come visit.

Oh, Deena’s doing fine, too. At the moment, she’s napping.

5. How long was Deena in labor?

Well, she’s officially been on maternity leave since August 1, so she hasn’t been doing any labor this month. For this, she is very grateful.

In all seriousness, I’m not sure how many pictures of Owen I’m going to post on this website. I’m in this weird place between being a proud father and a protective father. There are certain people in the world who don’t deserve the privilege of seeing my son’s face. What we’ve done, however, is to create a private, password-protected website for friends and family members for sharing lots of pictures and videos. We’re also posting some choice photos for our Facebook friends. But that’s it.

I will say, though, that being a new father has felt like moving to a new town and starting a new job while still maintaining the old job and having to commute back to the old house. Deena says she feels the same way except that she also feels like her arms and legs have been cut off. In other words, the shock of new responsibility has been tremendous — but we’re also very happy and very much in love with our little boy.