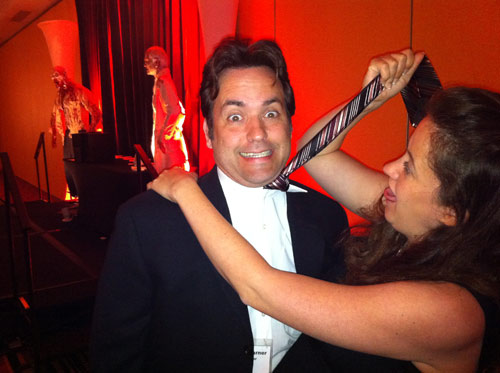 Just got back from the Stoker Weekend in Long Island, NY.  (The Stoker Weekend, for the uninitiated, is the annual awards event of the Horror Writers Association to celebrate excellence in writing.)  Deena, as the artist guest of honor, received lots of great attention, although I wish they had included her in the panel discussions that were billed as featuring all the guests of honor. Anyway, we had a good time, as you can tell from this photo that Michael Arnzen snapped of us at the banquet.

Professionally, I had a fairly good con: got some leads on markets to submit to, met folks like Michael Knost, whom I’d only worked with via email to that point. I also had a troubling pitch session with an editor of urban fantasy who told me that my manuscript can’t possibly be in that genre because it’s not written in first person. Since I’m not widely read enough in UF to claim otherwise, I’ll have to take what she says on faith although the criterion strikes me as a little shallow.

Our son, Owen, had a great time, particularly swimming in the hotel pool and hanging out with Aunt Adrianne, and he tolerated the two 8-hour car trips well. He’ll be spared any more long trips for the rest of the year as we buckle down for the debut of Boy Spawn #2.