The NY Pitch Conference is a Career-Charging Career-Changer

My wife’s cell phone buzzed the arrival of a text message from her mother. I normally don’t invade Deena’s privacy by reading her messages, but it was the middle of the night, and if I didn’t stop it, the damn thing would buzz, loudly, once every minute until someone tapped VIEW.

“Wonderful,” I texted back. “I’ve been awake since 230, though. — Matt” I quickly followed that up with, “Sorry. Deena’s phone buzzed, and I was sitting here.”

“Why can’t you sleep? Plots and plans for next project running in mind?”

What I didn’t tell her about was the wonderful author I met there who made his bones in Christian category fiction. He sets aside ten hours every week to personally answer every fan letter. He told me that when his wife (who was sitting right there) became too sick to walk, he spent months carrying her where she needed to go. To the bathroom, up the stairs, wherever. He was glad to do it. That’s his understanding of true love, he told me.

He has seven kids, and I have two.  I kind of want to be like him.  We share that deep love for our children. Fortunately for me, it’s that love which powers the primary character arc of the fantasy novel I took to the New York Pitch Conference to sell. It’s about a man who travels across a parallel America, where human sacrifice is the norm, searching for his missing four-year-old son.

Fortunate, I say, because when a story comes along that fires on all cylinders, you feel it. The acquisitions editors who hear your sales presentation feel it, too. They’re not dummies.

I pitched the motherfucker out of that novel.

But a successful pitch is only a foot in the door. Now the writing has to stand on its own legs. My hopes have been cruelly crushed before. It’s all part of the business.

My hat is off to Michael Neff of Algonkian Writer Conferences for putting this together. He’s been organizing this quarterly event for ten years, and he knows his shit. I could go on and on, name-dropping for you, about the publishing gods I met. Suffice to say that somehow, magically, Michael has cultivated an unmatched network of top-tier professionals. I have been submitting for publication for twenty-five years, folks, so you can trust I am not bullshitting when I say these things.

Back to the pitch. If there’s one piece of advice I’d like to pass on to other writers, it’s as follows.

You. Must. Memorize. Your. Pitch.

This should be self-evident, but apparently it’s not. A pitch session is a five-minute — sometimes less — in-person sales presentation. It’s to a literary agent or acquisitions editor who has — and I am not exaggerating — nine thousand other competing solicitations waiting in his or her inbox. A successful agent might read more than 120,000 queries from writers annually and take on only a single new client.

So, which writer do you think is going to be seem more credible, authoritative, professional, sincere, and skilled: the one who sits there, reading from his laptop screen without making eye contact, or the one who can deliver a dramatic monologue consisting of, essentially, the short-story version of his novel? But hey, don’t take my word for it. Thomas F. Monteleone, bestselling novelist, my friend and mentor, backs me up on this. He’s the Padrone, and he has like thirty years’ more street cred than I do.

That being said, there were a few writers who did sit there, reading off their laptops, who nevertheless received the coveted blessing, which is, “Yes, I would like to read your manuscript.” That is a testament to the power of that person’s writing, that he/she would still receive that nod despite his/her best efforts to the contrary. The rest of us mere mortals, however, need every edge we can get. And that means being the most persuasive salesman possible. I want you to buy my vacuum cleaner, goddammit, so that means I will not have to glance at the instruction manual when you ask a question. That vacuum cleaner can suck the chrome off the space shuttle, so you should have absolute confidence in me when I say you won’t waste your time by giving it a test pass across your carpet.

“But no, Matt,” my fellow writers told me. “My pitch has undergone such massive rewrites since I came here that I need to have my laptop with me. I couldn’t possibly memorize every new version.”

Bullshit. Have you ever seen an actor read from his script in the middle of a movie you’ve gone to watch? Of course not. You think that actor may have had to memorize a whole new set of lines on the same day that scene was shot — maybe even minutes before the director yelled, “Action”? Yes. I’ve seen it happen.

“But Matt, writers are introverts. I don’t have your acting skills.”

Then you better learn. What, you think I’m an extrovert? I got news for you. On the inside, I’m an introvert, too. I am so fucking drained right now, as I write this, from interacting with people, that I’m gonna need jumper cables surgically attached to my heart. But I have learned over the years how to act like I’m an extrovert. I have learned public speaking, and yes, I’ve done some theatrical and movie acting. And those skills have saved my ass, both professionally and personally.

You can do it. You are a writer, but you are also your own best ally. If you don’t one hundred percent believe in yourself and your product, then no one else will do it for you.

At five a.m., Owen woke up with diarrhea, again. He was thereafter hungry and thirsty, so we sat at the kitchen table and ate an early breakfast. Actually, he ate. I drank coffee and listened to my haggard skin drip off my skull.

“Did they have trees in New York?”

Somehow, that led into a conversation about death. It always does around here. We discussed how cats die, and people die, but kites don’t die. When the wind ripped apart his kite last week, we threw it away. Owen wanted to bury his kite, but I said no, you don’t bury kites.

I told him, matter of factly, that I’m going to die one day. And for the first time in my life, I was all right with that. I realized that, regardless of what comes from this pitch conference, every word I have left to write happens between now and the day I die. Until I come back as a ghost, of course. So I might as well do it, no matter if I succeed or fail. Or, as the Padrone puts it, I’m just gonna lay my balls on the table and pass out hammers.

With that, I finally relaxed enough to sleep.

Here are some pictures from my trip. Click any thumbnail to enlarge: 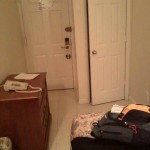 I stayed at the Americana Inn on W. 38th St., just blocks from Times Square. I could literally put my feet on the wall to the left and touch my head to the wall on the right. Communal bathroom in the hallway (with a lock). Not my usual standard of luxury, but it was clean and the right price. 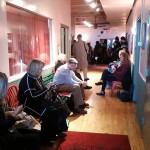 Writers waiting to deliver pitches at Ripley Greer Studios. Tons of mirror-lined audition rooms, each with a piano, filled the floor. Actors and singers (Broadway, I would imagine) auditioning for parts kept walking past us. It was awesome to hear people doing vocal warmups through the walls. 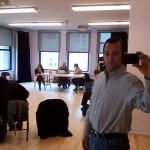 Writers in my particular pitch group (for speculative fiction) workshopped their pitches with each other between meetings. Here is the first selfie of my life, shot in the mirrored wall. That’s Michael Neff back there at the table, helping a writer to polish her pitch. Why wasn’t I also working on mine? Because I was born ready, motherfucker. 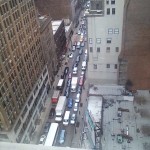 The view from Ripley Greer Studios on the 16th floor. Funny, I can stand at a window like this, no problem. But when my airliner takes off from a runway, I suffer the worst panic attacks imaginable. 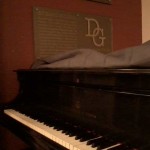 I took a side trip to the headquarters of the Dramatists Guild of America. It was my first visit there, although I’ve been a member since 2012. That there is Richard Rodgers’ Steinway piano. Yes, that guy. He was one half of Rodgers & Hammerstein. He won an Emmy, Oscar, Tony, and Pulitzer Prize for some of the biggest shows in Broadway history. I even got to play the piano. It’s still kept perfectly in tune. The front office guy, Nick, told me Rodgers had it specially tuned to remove some of the “brightness” of its timbre. For a lifelong pianist like me, this was kind of like fondling the Holy Grail.

If you stand in the right spot at Times Square, you’ll see your face up on a billboard. I’m over there next to the “3,” taking this picture with my cell phone.

Alas, I didn’t have time to take in a show here. 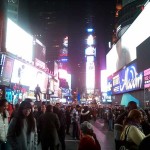 Pande . . . wait for it . . . monium. That’s right, this is Times Square, and you better have your wallet in your front pocket.

Thomas and Owen took time out from their busy diarrhea schedule this morning to welcome me home.