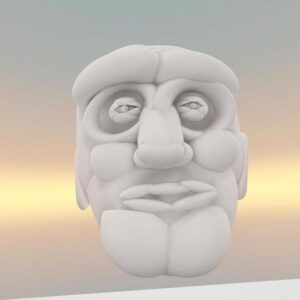 With help from Jay Haynes (Sensei_Jay), I’ve launched a new Horizon Worlds game called “Head World.” In this VR game, you explore a volcanic lake floating in the sky. A giant sculpture of a head, inspired by the 2016 album cover of “Between Two Worlds” by Stonila, floats in the middle, and a castle tower ascends from the top. Features include two flying carpets, a motor boat, two human cannonball cannons, fireworks, and a walkway around the lake’s rim. The setting also features a volcano courtesy of Alex Chandler (Laex05). Don’t stand in front of the head’s left eye, or you might be in for a surprise!