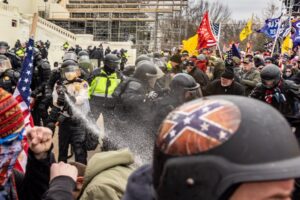 There are three abhorrent memories that come to mind this morning when I think of Donald Trump.

The first is that during his presidency, he took a vacation just about every weekend. And he didn’t just go anyplace; he always went to one of his own golf resorts. By doing so, he promoted his commercial brand (which you’re not supposed to do as president) just like he did when lining up Trump steaks in front of the press corps, and he spent our taxpayer dollars directly upon his own enrichment (after all, the Secret Service had stay in hotels somewhere). The Secret Service blew their budget protecting him during these dalliances.

The second memory is of his gaslighting about the COVID pandemic. Although he knew early on how serious it was, he lied about it to the public. He lied because he knew presidential fortunes can be tied to boom economies. To acknowledge the threat might have hurt our economy and therefore his re-election chances. And because of his gaslighting, the government responded slowly and ineffectively at a time when it could have made a difference. So he lied, and we died.

Finally, my third memory is of January 6, 2021. I’ve been watching the Congressional hearings this week instead of Tucker Carlson’s “pay no attention to the man behind the curtain” routine. Trump corruptly tried to subvert our democracy. He and his rioters tried to overthrow our government. A majority of Americans believe he should be criminally charged.

So here’s what I don’t understand. A majority of Americans also say they would re-elect that fool.

Could both polls be correct? Could a majority of us both want him charged and want him re-elected?

I hope not. I hope we’re not that lost.

In resisting the need to wear masks to combat the spread of COVID-19, a couple myths keep circulating faster than the virus.

Myth #1: “Masks make it too hard to breathe. They lower your O2 and increase your CO2.”

I could appeal to your common sense with mask charts of questionable origin, but this nurse with a pulse oximeter and end-tidal carbon dioxide monitor does it better. Even while wearing three masks at once, his blood oxygenation doesn’t decrease, and his retained carbon dioxide doesn’t increase.

Myth #2: “Masks are ineffective in stopping the spread of the virus.”

Nobody has pretended that a cloth face covering with the consistency of your underpants is as effective a shield as an N95 respirator. Instead, the purpose of masks is to stop aersolized virus particles at the source. I may not have symptoms and realize I’m infected, so I want to stop my breath from hitting you, just in case. 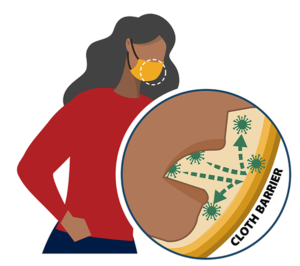 To illustrate this concept, I propose a simple experiment you can do at home:

I predict that in step #1, you will feel a stream of air hitting your hand. That is the exhalation that is potentially laden with respiratory droplets. Those droplets are the virus vectors we don’t want to blow onto other people.

In step #2, I predict you won’t feel that stream of air. The droplets containing your virus do not reach your hand.

Myth #3: “I’ll just wait for a vaccine or for us to achieve natural herd immunity.”

We can’t wait for the deus ex machina of a vaccine, because although there are many promising candidates out there, nothing is guaranteed, and all the idiot anti-vaxers aren’t going to take the vaccine anyway. Even if a good vaccine is coming, we probably won’t get it until the next presidential term in 2021.

Nor can we wait for 80% of the population to become infected and to recover so we can achieve natural herd immunity. There are currently 328,200,000 people in just the United States. If our daily infections doubled to Dr. Fauci’s nightmare prediction of 100,000 cases per day, it would take over seven years to infect 80% of us.*

Sure, I haven’t subtracted the percentage of the world who may already be immune. This is just a rough calculation to show herd immunity will still take a long time. And while we’re waiting, up to 10% of those 262,560,000 infected people could die. That’s over 26 million people.

Grow up, and wear your mask. If a vaccine ever becomes available, take it.

State of the Corona

I hope everyone reading this is on the course to some financial, medical, and mental stability, and I wish them well. Of course, hopes and wishes are nearly as worthless as thoughts and prayers, so I’m sorry for that. Isn’t it sad that this simple sentiment — a hope and a wish for your well being — as worthless as it is, is already more empathy than what our president can summon?

I’m so sick of that rotting orange in the White House, and I’m sick of reading about how he has and continues to screw over this country during the pandemic. As early as January, when intelligence agencies warned him this was coming, he played round after round of golf at our expense when he should have been asking us to shore up supplies of PPE and ventilators. In fact, he could have started on that a couple years earlier, when he was warned such supplies were dangerously low, rather than spend his time firing the pandemic task force.

It’s obvious that his sole concern right now is not our health and safety but his re-election, and the key to that is the economy. He wants governors to reopen schools this spring because schools are a vital part of the economic engine — the health and safety of our children be damned. He’s so desperate for us to get back to work that he wants us to inject household cleaners and UV lights into our bodies, and failing that to take an anti-malarial drug, an unproven and dangerous treatment for COVID-19, which he happens to have a financial interest in.

I am not yet sick from the corona, but I am sick of him.