Tonight, I’ll read an excerpt from THE SEVENTH EQUINOX at an open mic sponsored by the Staunton Waynesboro Augusta Writers Group. 6 p.m. kibitzing, 7 p.m. open mic. AVA Restaurant and Wine Bar, 103 W. Beverley St., Staunton. This is open to the public, so stop by!

A Good Woman Is Hard to Find

My wife, Deena, sure has been a huge help with the release of The Seventh Equinox. Check out this point-of-purchase display she made for our local bookstore, Bookworks, in advance of my Dec. 7 signing there. 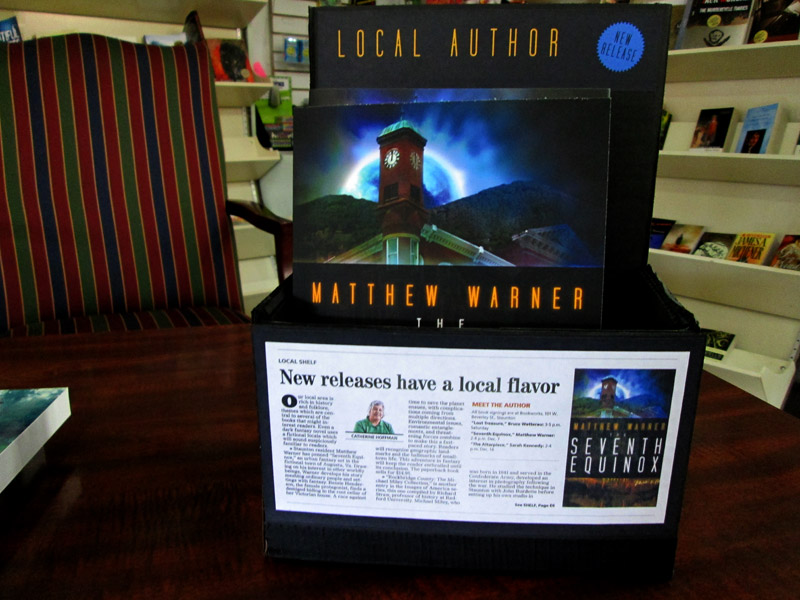 Point-of-purchase display for THE SEVENTH EQUINOX, made by my awesome wife (and featuring her cover art). The article on the front ran in the Nov. 10, 2013 edition of the News Leader.

On top of that, Deena also made all these freebies for readers to download:

The desktop art is based on yet another advertisement that she made. It’s on-screen ad at Zeus Digital Theater in Waynesboro that’s been running before each movie showing for the past month, also promoting the signing I’m doing at Stone Soup this weekend.

All this comes after the work she’s done for my other releases. This includes the cover art and design for Blood Born, No Outlet, Death Sentences, Horror Isn’t a 4-Letter Word, Eulogies I and II, Tales from the Gorezone, the DVD box art for The Lovecraft Chronicles . . . shall I go on?

So let’s hear it for Deena! What do you think I should get her for Christmas? And no tasteless jokes about what I’m “paying” her. . . .

Posted in Blog | Tagged The Lovecraft Chronicles, The Seventh Equinox

Staunton’s newspaper, The News Leader, featured my book in its “Local Shelf” column about new book releases from area authors. In the print edition of Catherine Hoffman’s article, THE SEVENTH EQUINOX‘s cover appears as a large color image on its section’s front page. (This is the type of thing that makes writers go, “Woohoo!”) She writes that this “dark fantasy novel uses a fictional locale which will sound suspiciously familiar to readers” and “will keep the reader enthralled until its conclusion.”

Finally, it’s here! The Kindle eBook edition should be available on Amazon within the next day. The eBook edition is in the Kindle Matchbook program, which means anyone who orders a hardcopy through Amazon can download the eBook version for free.

Also be sure to bring your copy to one of my many upcoming appearances. I’m full of snide gossip, so I’ll make it worth your while.

What are you waiting for?

Another new review! Diane Donovan of Midwest Book Review writes that THE SEVENTH EQUINOX is “a fast-paced story of magic, renewal and adventure perfect for urban fantasy genre readers.”

Book reviews are starting to roll in! Christine Morgan of The Horror Fiction review writes, “With a cast of amusing, well-rounded characters … The Seventh Equinox is a lively and entertaining read, clever, sexy, and fun.” I never thought “sexy” would be applied to one of my works, so this is a banner day for me.

Freebies from THE SEVENTH EQUINOX

Free swag — Download your very own website banner and desktop art about THE SEVENTH EQUINOX. And don’t forget that if you order the print edition by Nov. 6, you’ll receive $2 off.

Meanwhile, nobody conquered the Haunted House Adventure game. My evil genius remains virtually undefeated — and lonely. There must be a superhero out there worthy of the challenge. But who could it be? . . . (breaks into song) . . .

Poltergeist II was a seminal movie for me — but I didn’t realize until now how influential it was until I came across footage of Julian Beck playing the evil reverend, Henry Kane. And at last, I knew whom I unconsciously casted in the role of Gordy Parkhurst in The Seventh Equinox. Just imagine him with a little more Southern twang, and you got him. 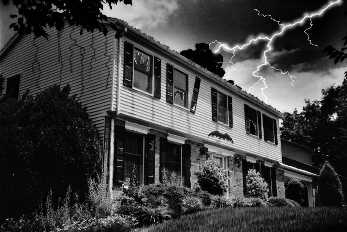 How smart are you?

The Halloween season has officially begun at the Warner house because I hauled all the mildewed decorations out of the shed. The living room is rife with scary bats and dancing skeletons — which inspired the Haunted House Adventure puzzle game you can still play on my website. In fact, it’s a pictorial tour of my home.

The first person to solve the game from now through Halloween will win an autographed copy of THE SEVENTH EQUINOX hardcover, out Nov. 6 from Raw Dog Screaming Press.

Disclaimers
This is not an easy game. Only three people have solved it in the four years its been online. So I won’t be responsible if it breaks your brain. I will only laugh.

Book trailer behind the scenes

The script for THE SEVENTH EQUINOX’s book trailer — plus other interesting tidbits about it — are up on Jennifer Brozek’s blog in my guest post, The Correct Response is “Whoa”.