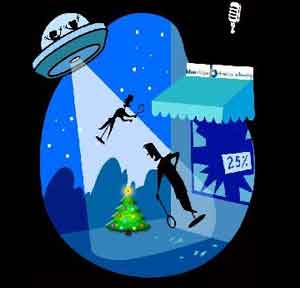 About the Radio Play

How the Martians Stole Christmas

It’s the night before Christmas Eve, and Santa Claus has taken his new reindeer-less sleigh for a test flight. But while in orbit around Earth, he is captured by two evil Martians in search of something called the Precious Resource. The Martians land at the Wayne Theatre in Waynesboro, Virginia. There, they interrogate Santa while their ship’s batteries recharge.

Santa’s only hope lies in two teenaged boys, nerdy Tommy Spilman and his troublemaker friend, Bennie Lomax. Tommy still believes in Santa Claus, much to Bennie’s amusement. But when they see the Martian spaceship and Santa’s sleigh atop the old theater downtown, they’ll both get more than they bargained for.

The River City Radio Hour in Waynesboro, Virginia, performed this play before a live audience as a 4-part serial in the fall of 2008. The play was part of a fundraising effort to rehabilitate the old Wayne Theatre.