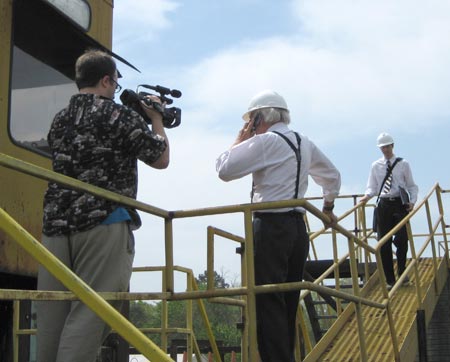 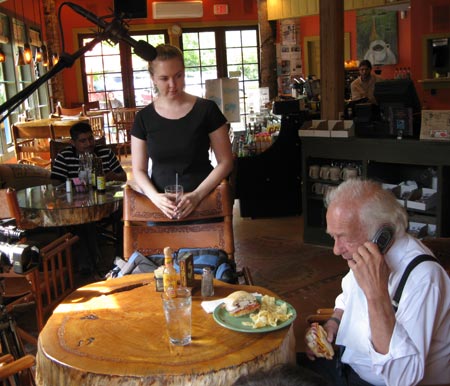 Today was kind of like an all-day comedy hour as we worked with veteran screen actor David Harsheid, cast in the role of Rob Flannigan’s eccentric boss, Mr. Putnam. When I showed up at Darkstone HQ this morning, Harsheid was walking around in his underwear, telling bawdy anecdotes about his long and colorful career. Did you know that he was an extra on the original Exorcist movie? Me, neither.

When it was time to get down to business, though, Harsheid was certainly serious enough about his craft — at least insofar as the script called for him to be serious. Mr. Putnam is actually the comic relief in an otherwise sad and contemplative story. Every nuance, every twitch of eye, was perfect. He’s a true asset to the cast, and I’m sorry that today is the only day we’ll work with him. You can watch Harsheid perform as a grave digger in the trailer to Darkstone’s forthcoming remake of Plan 9 From Outer Space.

Today, we shot in three locations. The first was a noisy lumber yard in Crozet, Virginia. A huge, flume-like machine with scary circular saws dominated the lot. Mountains of long tree trunks, stripped bare of their branches, loomed in the background. It’s a working lumber yard, of course, so as Harsheid walked around hollering at the main character on his cell phone, we had to not get run over by these gi-fucking-normous front-loader machines hauling trees to the flume/saw. Director John Johnson aptly compared them to some of the hardware seen in the recent Avatar film.

After that, we went to the Charlottesville bus stop location that was rained out yesterday. Harsheid told us more bawdy stories as we waited for a city bus to come by so John could film Rob Flannigan (played by Mikiah Umbertis) coming home from work. How did he catch him actually stepping off the bus? Well, he didn’t. He just waited for a bus to pull away from the stop, then panned over to show Mikiah walking away. He calls this sort of thing “guerrilla film making,” an indispensable skill when working on a small budget.

The final location was Charlottesville’s La Taza restaurant. Harsheid did more hollering on his cell phone and dropped a sandwich in his lap, as called for by the script. Production assistant Gary Carper and I sat in the background as extras and discussed horror literature. During a pause in Harsheid’s lines, a restaurant regular can be heard muttering something about a murder. It’s unscripted, but I say what the hell; keep it.

Tomorrow night, we head back to Marty Moore’s house to film the first scenes with the lovely Monique Dupree in the role of Jennifer. Before that, John is making an eight-hour roundtrip to Baltimore to pick her up. Dude, that’s hard core. Filming doesn’t wrap until 11 p.m. tomorrow night, so I won’t be able to blog about it until the evening of the 24th, between traffic school and babysitting. See you then!