“The Good Parts” is finally available online at IMDB. This short movie about an unlikely romance between time travelers is free to view. Break out the popcorn, and enjoy!

THE GOOD PARTS Movie Has Premiered

Click here to see pictures from the premiere showing!

The final cut of the movie is done!  We’re having a premiere showing on November 13 here in Staunton.

The only affordable and available place I could find has a fire code limit of 50 people, so reservations are required.  More info on my Appearances page.

Incidentally, the Augusta Free Press just ran another article about this and my other projects with John Johnson.

Just got back from the Horrorfind Weekend convention in Gettysburg, PA, where I gave a reading of my tie-in short story to Darkstone’s forthcoming Lovecraft Chronicles.  I got a lot of questions about the status of my various projects with Darkstone, so here’s what I know:

Posted in Blog | Tagged The Good Parts, The Lovecraft Chronicles

Production update on THE GOOD PARTS

Yesterday at Darkstone HQ, I got to watch the rest of the first cut of the movie.  It weighs in at the 20-30 minute range, as expected, but I expect it’ll be shortened a bit.

The first thing to go: some of the 17 bazillion “I’m sorry” lines that Jennifer says!  It’s totally my fault, because I wrote it that way.  But I didn’t realize until watching the movie how jarring it is to hear so many of them.  “She sure apologizes a lot,” I said to director John Johnson during the screening.  “Well,” he said, “she is going crazy.”  Still, I hope we can trim them down.

While I was there, we listened to Richard Adams’s latest version of the title music, and I think we have a winner.  To test it out, John played it on his computer while the movie’s opening sequence rolled in a separate media player.  “I think I want to cry,” I said.  His response: “Have you read your script lately?”

Another area he’ll be retooling in the next cut of the movie is the opening scene’s pacing.  Again, thanks to my scripting, there’s a special effects shot within the first few seconds of the film.  I’m now concerned that that’s not enough time for viewers to register the basic facts of the scene — that there’s a woman sitting alone in a restaurant — before they have to parse this new thing we’ve thrown their way.  Is the answer to slow the effect down, front-load the scene with some extra footage, or reorder a couple of the shots?  I expect this will shake out in the next cut of the film, when John starts to add sound effects and music.

Anyway, it’s all coming together!  I think we’re on track to finish up in July.

When I got home, I had an email waiting for me from a reporter at the Staunton News Leader.  She was writing about the Virginia governor’s signing of a new law that gives tax credits to film makers.  I didn’t have much to say on the topic other than, “Duh, me makey movie good,” so I referred her to John.  His quote wound up on the paper’s front page this morning.  You can read the article here.

A magazine here wrote a great cover article about “The Good Parts” movie.  Lots of cool pictures.  If you live in the Staunton/Waynesboro/Augusta County area, The New Dominion can be picked up for free at your grocery store. Click below to read: 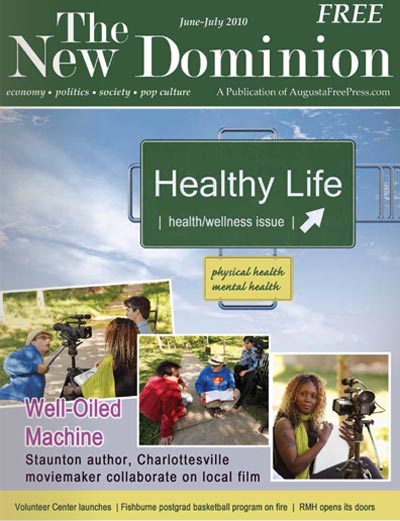 Update on THE GOOD PARTS

It sounds dirty, doesn’t it, to say a film is “in the can.”  It gives me a mental picture of the director sitting in a Port-A-Potty somewhere, his laptop resting on his bare thighs, as he edits the film.

Anyway, I saw the first 15 minutes of the rough cut today (about 1/2 of the movie), without sound effects and music, and it looked pretty cool. It was weird to watch footage that I’d previously seen in the raw now put together in order. For those of you following the saga about the “They’re pretty good, aren’t they?” line versus the “They’re not very good, are they?” line in the basketball scene, John went with the latter.  (Sorry, Chris.)

Sitting with me was Richard Adams, a renowned local composer and musician who will be writing and recording the theme music.  We had small comments and questions for director John Johnson about the special effects, audio, and transitions, and some discussion ensued about where things like the credits and music will be inserted.  Overall, I’m very pleased with how it’s turning out, and it’s exciting to see something I wrote coming to life on the screen.

We’re hopeful that the film will be in final form by the end of June, but production delays are always possible.  More news when I know more!

The Good Parts of Movie Making

Horror Drive-In ran an interview with me right below the text of “Cat’s Cradle.” In it, I dish about The Good Parts and everyone involved. Read it here!

The Augusta Free Press just ran a behind-the-scenes look at The Good Parts, concentrating in particular on the last day of filming.  The online article, available to subscribers, is kind of a prequel to a more in-depth article coming in the June-July issue of The New Dominion print magazine, which will be available for free in the Augusta county area.