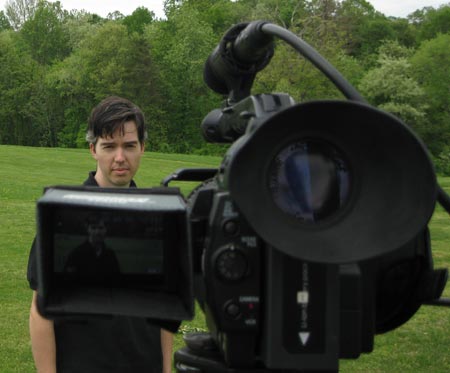 Yesterday was a fun day. Well, they’ve all been fun, but yesterday some of us got to run around outside like lunatics, and John Johnson can now say he’s made his first baseball picture.

Running around outside like lunatics: that would be Mikiah Umbertis (playing Rob) lunging across an open field in a series of narcoleptic-like time shifts, trying to reach Monique Dupree (playing Jennifer) as she spins around and around, spaced-out in a world of her own.  The script originally called for her to be nude in that scene, but, as much as I’m sure Monique’s fans would be delighted to see her in the buff, we dropped that part in the interests of keeping a G rating.

Baseball picture: that would be the scenes we shot at the Elizabeth Mullan Field in Charlottesville. Lots of ball throwing, bat swinging, and angsty dialogue. At one point, I stood behind the director’s shoulder while Mikiah threw a baseball directly at the camera. A flash of, “I hope this camera is insured,” went through my mind as I realized the director and I were just as vulnerable as the camera. I held my script over my nuts and shrank into a little ball behind John. It was a pretty cool special effects (SFX) shot they doing, requiring John to film the actors separately so he could match them up — at different speeds — in post production. He took some insurance shots in case what he’s planning fails and a computer graphics artist needs to be called in. That would delay the release date but would be worth it.

We did a nighttime shoot in John’s driveway using my car. It was to show Rob dropping Jennifer off from a date. Further dialogue editing ensued while we waited ten minutes for a noisy train to pass.  It was pretty damn cold by that time, too.  The story is supposed to be in the summer, requiring lighter dress, so the actors ran the car heater between takes.

As the day concluded, John and I discussed the rest of the production timeline. We’re most likely going to wrap the shooting schedule today, April 28. Then, the next month will be about editing together a rough cut and added a soundtrack. We’ll then probably have a test screening with some trusted advisers before making the final cut and scheduling a premiere date in Staunton.