The Good Parts: That’s a Wrap 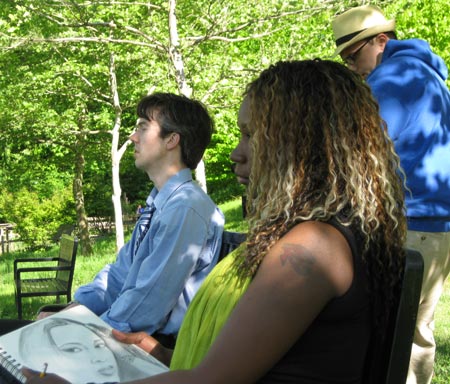 Rob and Jennifer (Mikiah Umbertis and Monique Dupree) break the ice next to a basketball court. Director John Johnson sets up a shot over Rob's shoulder.

There’s a term you sometimes hear in the same breath with indie movies: “guerrilla film making.” I think it refers to the art of using chutzpah and creativity to secure filming locations with limited resources. Our last day of shooting more than any other felt like it fit that definition.

It started with the basketball court we used for the scene where Rob and Jennifer meet for the first time. What more could you ask for: beautiful daytime lighting, a pickup game full of extras playing with varying skill,* and a children’s playground. Except, since we didn’t have the financial resources to, say, shut down the entire park, we couldn’t very well prevent that one little girl and her father from engaging in some noisy play just a few feet from our actors. And then there was the absence of outdoor lighting at the basketball court, which meant that the script had to be rewritten on the spot to allow the characters to take a stroll to somewhere better lit.

Not that I’m complaining, really. The locations that director John Johnson and producer Mikiah Umbertis (also playing Rob) came up with turned out to be awesome. After getting kicked off the plaza in front of the Lexis-Nexus building (well, it certainly looks like public property to me), we went to the nearby Charlottesville Pavilion and a well-lit sidewalk. We ultimately wound up at Charlottesville’s downtown walking mall. Monique Dupree (playing Jennifer) and Mikiah devoted at least 50 percent of their acting skills to not shivering in the way-too-cold-to-be-in-short-sleeves weather. Unfortunately for them, the story is supposed to take place in June. (Thank you, Monique and Mikiah!) Incidentally, the final shot of a film shoot is called the “martini shot” because directors have traditionally celebrated by drinking a martini. It was so damn cold, though, that we just hurried back to our cars.

Now that shooting has wrapped, The Good Parts is, as they say, in the can. I’ll trek out to Darkstone HQ early next week to watch the remaining dailies and then leave the film editor to do his job. The current timeline is to premiere the movie in June. Stay tuned!

*As insurance, the actors performed Rob and Jennifer’s commentary about the basketball players’ skill in two different ways: “They’re good, aren’t they?” and “They’re not very good, are they?”