Tomorrow night, I’m attending the movie premiere of PLAN 9, Darkstone Entertainment’s remake of the classic 1959 sci-fi/horror schlock fest PLAN 9 FROM OUTER SPACE by Ed Wood, Jr. My involvement with this film is multi-faceted: I have a bit part as a zombie who gets blown away by the military, I collaborated on the screenplays for the Criswell Predicts! video shorts to promote it, and I’m an investor-producer. I’m also engaged in writing the novelization of John Johnson’s screenplay.

Many talented actors star in the film, including Brian Krause, Matthew Ewald, Monique Dupree, Addy Miller, and Mister Lobo. Conrad Brooks, who starred in the original Ed Wood film over 50 years ago, returns for a cameo.

My congratulations to Darkstone for finally launching this flagship film from the docks. I look forward to seeing the finished product tomorrow at the Grandin Theatre in Roanoke, VA.

Here are some pictures from the premiere! 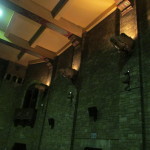 The Grandin Theatre has beautiful gargoyles and balconies in its main show room. 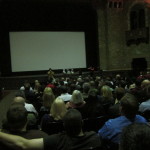 John Johnson gave a speech and raffle prizes before the show. He had a full house!

Some of the cast members included John “J.P.” Price (the bald guy who played Inspector Clay) and Monique Dupree (white blouse; she played Officer Becky). The ham in front is Monique’s husband Saint, who designed some of the P9 swag. 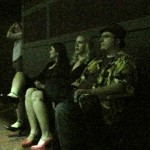 (L-R) Angela Pritchett, Mariah Johnson, and director John Johnson sat all the way in the back to gauge audience reaction.

One thought on “PLAN 9 Movie Premiere”