The Voices of Ghosts 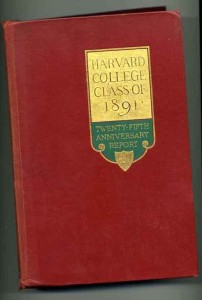 One of my prized books is the Harvard College Class of 1891 Twenty-Fifth Anniversary Report (Plimpton Press, 1916; 418 pgs.), which I bought for a dollar from an antiques store. For a 98-year-old tome, it’s in excellent condition and has served as a valuable writer’s resource. Why? Because of the stories. It’s full of 1-2 page autobiographies by every member of Harvard’s class of 1891, complete with then-and-now photographs.

They’re all men, of course, and most of them seem to have led distinguished careers as judges, doctors, lawyers, and politicians. But what fascinates me (apart from the photos) are the wonderful names, which I plunder for my characters, and occasional flourishes of personality.

• Raymond Weeks (b. 1863) of Andover, Mass., reported to his classmates that he spent some of the 1890s in France and Berlin, “where I disliked and despised the Germans as much as I had liked and respected the French.” Now teaching Romance languages at Columbia University, “I have had the usual empty honors from various learned societies, have affixed my name to perhaps a hundred publications, and — more important — have played in a number of hotly contested golf matches.”

• Edgar Jonas Knapp (b. 1867) of Wisconsin reported that he’d had a colorful career in the 25 years since graduation. After beginning his medical practice in 1894, he sailed to Europe for some mountain climbing and eventually returned to Chicago to run a battery manufacturing company. Now a physician again at Rice Lake, he said, “The old saying that ‘a rolling stone gathers no moss’ has proven true in my case, but I have settled down now and so far as I know shall remain here until I gather moss or grow barnacles — or both.”

• Karleton Spalding Hackett (b. 1867) went on to become a music critic and musician after he left school. “As a critic I have had the good fortune to avoid assassination at the hand of any enraged artist, or suffering violence from the infuriated public.”

• Perley Doe (b. 1868) of Arlington, Mass., asked if there were other members of the class of ’91 interested in corresponding about Industrial Socialism. “If in the few years that remain I am able to demonstrate Socialism to the world as Darwin demonstrated nature’s evolution of organic forms, — well that will be about all that at present I hope to accomplish.”

These are some random excerpts from just 15 minutes of perusal. In the past, I’ve come across rants about the president, the Boxer Rebellion, the Spanish-American War, and even fashion trends. Every time I open this book, it’s a treasure.