My entry to the Interactive Fiction Competition 2020 (IFComp2020), Tombs & Mummies, received a kind writeup by reviewer Mike Spivey. He says, “Tombs & Mummies is a puzzle game in a classic setting that nevertheless manages to do some interesting things both technically and story-wise.” Read the review.

There’s still time for you to review five entries in IFComp2020 and thus serve as a contest judge.

Tremendous Book Reviews Posts a Super-Long, 5-Star Review of EMPIRE OF THE GODDESS

Holy cow! This book reviewer posted a YouTube book review of Empire of the Goddess that goes on for thirty-seven-and-a-half minutes. That’s a first for me, and it’s very flattering that he thought so highly of it (5 stars). The non-spoiler section of his review at the beginning is about six minutes, so if you haven’t read Empire of the Goddess yet, then that’s the part to listen to for now.

The good reviews of Empire of the Goddess keep coming in! The newest is from Cemetery Dance:

“Warner’s lean, muscular writing propels this novel, and the pacing is relentless, yet allows for strong world building. Recommended reading.”

The audiobook and eBook are still available from Audible and other retailers!

Horror DNA has published a thoughtful and mostly positive review of Cursed by Christ. The reviewer said it has an “exciting breathless pace weaving an amazing tale full of mystery and some well-plotted out twists” but nevertheless found it slow in parts. Valid criticism! I’m glad someone finally gave this trunk novel some analysis. There are also some mixed reviews on Goodreads, but altogether it’s still managing almost 4 out of 5 stars.

While I’ve had high hopes for it, Cursed by Christ has always been my “learning” novel. It taught me how to write a novel during college, and lately it’s taught me how to self-produce an audiobook. It’s been a good experience.

This week, book 4 of the Steel Empires urban fantasy/alternate series is released! In a world with vampires, warrior-mages, weredragons, and sarcastic violin players, time travel seems like the obvious next step. Read on for more information about Steel Time, by J.L. Gribble 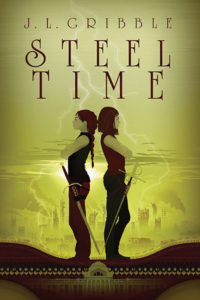 You’re never too young or too old to experience a paradigm shift.

Toria Connor is 25 when tripping over an artifact in the ruins of Nacostina thrusts her a century into the past, before the city is destroyed during the Last War. Now, she finds herself alone. Adrift in a time where she must hide everything important to her, from her mercenary career to her true magical ability.

Victory is over eight centuries old when she follows her adopted daughter. She has seen empires rise and fall, but never anything like this. She must survive alone in a city inhospitable to vampires, dodging friends and foes from her past alike.

Both of them know the clock is ticking down to the moment when the city is wiped off the map. Now, they’re in a race against time. To find each other. To escape the past. And to save the future.

It is possible to read Steel Time as a stand-alone book, but don’t miss out on Toria and Victory’s previous adventures!

By day, J. L. Gribble is a professional medical editor. By night, she does freelance fiction editing in all genres, along with reading, playing video games, and occasionally even writing. She is currently working on the Steel Empires series for Dog Star Books, the science-fiction/adventure imprint of Raw Dog Screaming Press. Previously, she was an editor for the Far Worlds anthology.

Gribble studied English at St. Mary’s College of Maryland. She received her Master’s degree in Writing Popular Fiction from Seton Hill University in Greensburg, Pennsylvania, where her debut novel Steel Victory was her thesis for the program.

She lives in Ellicott City, Maryland, with her husband and three vocal Siamese cats.

Find her online at:

With all the other recent book news, I hope you didn’t forget about this one. The Horror Fiction Review just called The Organ Donor: 15th Anniversary Edition “seriously good stuff!”

New reviews of THE ORGAN DONOR

The 15th anniversary edition of The Organ Donor has finally received a few reviews on Amazon and from a book critic at Uncaged Book Reviews. It’s always nice when readers say they needed a hot bath and chat with a therapist afterward. Find out what you’re missing.