This weekend, Deena and I made our annual pilgrimage to the Borderlands Boot Camp for Writers, run by Borderlands Press. In addition to visiting all our pals such as instructors Tom Monteleone, F. Paul Wilson, and Doug Winter, we had the pleasure of getting to harrass Deena’s brother Rob Lineberger, there for his first experience as a grunt.

On Sunday, I satisfied my performance jones by doing cold dramatic readings of the stories the writers composed over the weekend.

Here are some pictures. (Click to enlarge.) If you believe any of the captions, then I have a bridge in London to sell you.

Rob proudly shows off the collaborator on his novel. He had been up for 120 straight hours by that point, so we refrained from telling him his co-writer was a coffee cup. Not pictured: Deena’s face. 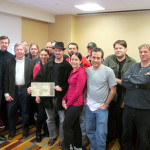 Grunts of the Borderlands Boot Camp 2015. Rob shows off the placemat he prepared over the weekend. Not pictured: Paula Deen. 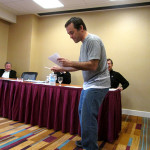 Having drunk the Alice In Wonderland enlargement potion from the glass pictured under my right hand, I grew to twice the height of a normal man. I’m magical, I tell you. 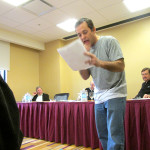 After reading a story, I normally eat the manuscript. I’m pictured here in the process of taking my first bite of one. 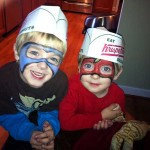 Meanwhile, my sons, Owen and Thomas, matriculated at the KrispyKreme School for Gifted Youngsters. So far, they have only designed their super hero costumes, but we’re expecting great things from them.

2 thoughts on “Visit to Borderlands Boot Camp for Writers”