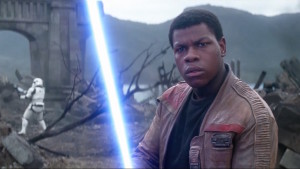 Some thoughts about Star Wars: The Force Awakens. This post contains POTENTIAL SPOILERS, so stay away if you haven’t yet been re-bapitized . . . or re-initiated . . . or re-Forcenized . . . or (nevermind).

The criticism of the film that most irks me concerns the degree to which Finn, as the token main character who is an African American, plays an integral part in the story’s resolution. Andre Seewood in his column, “Hyper-Tokenism: ‘The Force Awakens’ While the Black Man Sleeps,” has a huge problem with how Finn is knocked out during a climatic battle in the last act of the film and remains unconscious for the remainder of the story.  If you’ll recall, Finn is knocked out by Kylo Ren during a lightsaber battle, leaving it to Rey to pick up the lightsaber to defeat Ren (Ren/Rey, couldn’t they have found more dissimilar names?) and then for Poe Dameron, et. al., to blow up the Starkiller Base.  As Seewood writes:

In the context of the “Star Wars” franchise, full dramatic agency (the ability to influence, change, control and survive the dramatic circumstances within the story) is defined ultimately by a “selected” character’s ability to wield “the force” by intuition or training – the decision to not give Finn this final defining characteristic forces (no pun intended) this character into a supporting role for the Whites who are wielding this power. But when we add the fact that Finn is rendered unconscious for the final act of the film (not even able to applaud the efforts of his White cohorts) it can be said that we were not really following the heroic exploits of the Finn character so much as we were being led “by the nose” as it were, to a point where dramatic agency is ultimately still the providence of the White characters in the film.

Where this analysis breaks down is its focus on the use of the Force as being the critierion for dramatic agency.  If it weren’t for Finn’s actions, the Resistance would most certainly have failed.  Here are some of his accomplishments:

Finn very much was responsible for the outcome of the story, and therefore he had plenty of its “dramatic agency.”

Let’s also look at his coma in Act III from a story craft standpoint.  By the time he was knocked out, his character arc was complete.  He started as a stormtrooper and completed his change into a Resistance fighter.  His standing up for Rey at the end with the lightsaber was also, in my opinion, the ultimate statement of his love for her.  (And that’s another thing: I do think Finn has a massive thing for Rey.  And no, I don’t believe he’s going to have a homosexual relationship with Poe.  Get a grip, people.)

Once Finn was knocked out, it was then time for Rey’s character arc to be resolved, that of moving from her identity as a scavenger to a potential Jedi, from wasting away on Jakku, where she pined after parents who’d abandoned her, to moving forward with her life.  That couldn’t have happened if she and Finn were gripping Luke’s lightsaber at the same time.

Finn is a great character and great addition to the Star Wars franchise.  I think it’s wonderful that the two main characters are respectively black and female.  How boring it would have been to watch another movie with a big-chinned, 'roided-out white male as the lead.  But let’s not go down a rabbit hole of over-analysis and baseless accusations of things like “hyper-tokenism.”  If Finn in the next movie is relegated to serving Rey her tea before returning to his work in the moisture farm fields, then you might be onto something.  I think, however, this series will be more sophisticated.