Matthew Warner : Blog : The Most Realistic Fight in The Karate Kid (1984)

The Most Realistic Fight in The Karate Kid (1984)

One cool thing about being a dad is that I can roll out cliches like, “You’ll poke your eye out!” and “Eat your food; don’t you know kids are starving in Africa?” and they’re hearing these hoary old lines for the first time. These tidbits of intellectual lint come out of me like effervescent bubbles of genius, as far as they know.

So why not roll out classic movies from the 1980s as well? I’m talking stuff like The Thing and Iceman and the Star Trek films. And yes, The Karate Kid — the original one with Ralph Macchio and Pat Morita.

The Karate Kid is now all the more interesting to me as a storyteller and a martial artist. It’s in this second capacity that I approach you today in my mission to promote all things Brazilian Jiu-Jitsu.

I know — there ain’t no BJJ in The Karate Kid, right? That’s what you think.

There’s this one scene we watched last night before it was time for the nightly rounds of teeth brushing, jammies, and oh-my-god-look-at-this-pigsty-of-a-room.

In the “soccer fight scene,” one of the bullies from the Cobra Kai school slide-tackles Daniel during an after-school soccer game. Here it is from about 1:35 – 1:47.

I’m calling this the most realistic fight because that’s how most street fights go down. Forget about the crane stance at the All-Valley Karate Tournament at the story’s climax; attempting that in the real world will only get your own ass kicked when you fail to time the snap kick perfectly and when your attacker blocks your foot. The soccer fight immediately went to the ground, which is where most fights in the real world land.

Am I speaking from some experience with real world fights? Unfortunately, yes. Am I speaking with the authority of a sick fascination with street fight Youtube videos? Also yes. Am I basing this also on the opinions of my betters in the martial arts world? Yes.

Watch the clip from The Karate Kid again. Side aside for the moment whether Daniel was in the right to lose his cool after the slide tackle, and let’s stipulate for the sake of argument that he was protecting himself from an assailant. Because what he did — if this had been a self-defense situation — was exactly right. Daniel rushed straight in, getting inside his opponent’s punching range, and executed a tackle somewhere between a double-leg and a leghook takedown. Cobra Kai guy (CKG) reacted at first with a guillotine hold before sweeping Daniel to a mount position. Daniel sweeps him in turn, and when CKG neglects to close his guard and hug Daniel close, Daniel postures up and nails him with a right cross. CKG momentarily traps Daniel’s extended right arm in an arm-drag position and appears ready to come up on top of Daniel’s back before onlookers break them up.

So, I’ll just leave that there for you to contemplate when you’re done admiring the fight choreography of this scene. How would you react in a rapidly developing situation like this? Crane kicking is the wrong answer.

Anyway, I enjoy spotting BJJ moves on screen now that I know what to look for. Click below for a Facebook gallery I made a few years ago. See if you can guess the movie before clicking on each picture for a detailed description of the fighting techniques. 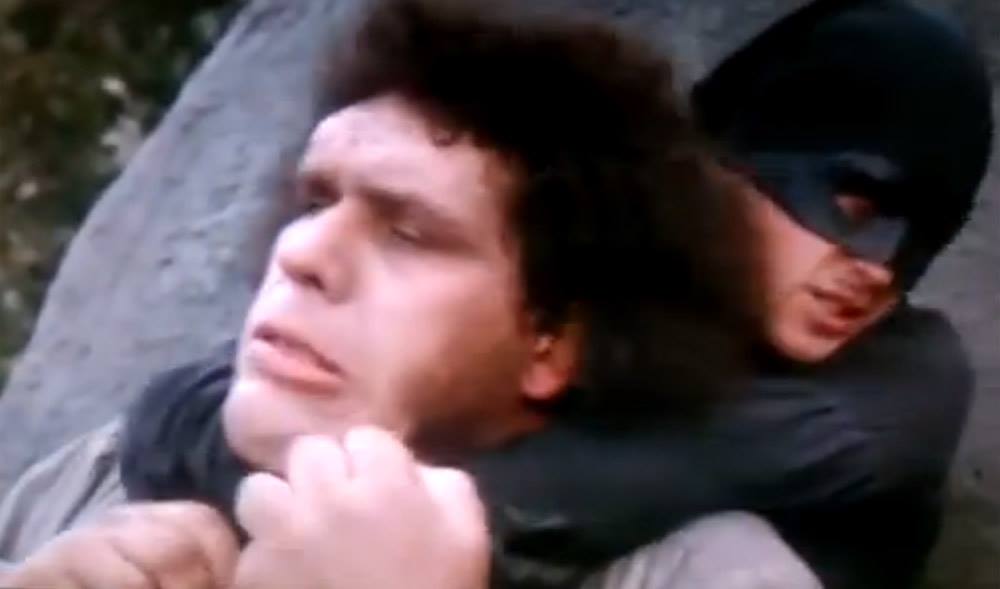