Tag Archives: Empire of the Goddess

Inspiration for EMPIRE OF THE GODDESS

There’s rarely a single source of inspiration for any story I write. Empire of the Goddess had three: parasites, religious myth, and my sons.

One day, as I raised my invisible antennae to detect inspiration, I took a long walk around the neighborhood. My part of Staunton, Virginia, resembles the DC suburb I grew up in, with its single-family homes and trees. In the middle of the work day, with folks away at their jobs, it can feel like a ghost town. The familiar becomes quiet and sinister. I noticed odd details that I dutifully dictated into my handheld voice recorder. A squawking bird flew by with strange, mechanical motions. A puddle in a rain gutter concealed a bottomless pit. But what really caught my attention was the empty lot at the end of the street.

Beyond a gravelly area that marked a future road extension, a line of woods opened into another world. The trees formed a corridor into a forest of unnatural overgrowth. It felt like peering down the maw of some planetary vampire, sucking life out of the world. What if one of my boys, then aged 3 and 5, were lured into that throat? I would have to go after them.

From that visceral feeling came my main character, Thomas Dylan, whose young son, Walter, is abducted through a portal to parallel world — a world that feeds off ours.

But what kind of planet would do that? What kind of society would steal our children?

At the time, I was reading Reza Aslan’s terrific book, Zealot: The Life and Times of Jesus of Nazareth. Aslan describes a first-century Palestine teeming with itinerant holy men performing faith healings and exorcisms. They sometimes called themselves messiahs and made resistance to the Roman Empire a religious duty. In such a time, to preach about an empire of god rather than man was a capital offense.

I reasoned that a fantasy world structured similarly would seek to keep its populace under an iron fist of control. With disease and sin entwined caduceus-like in meaning, a theocratic imperium would ensure it alone dispensed healing and its deity’s forgiveness. Imagining the most dramatic mechanism I could for such oppression, I followed this garden path of thought back to the forested portal at the end of my street.

Why would this parallel world want to kidnap people from ours, casting a net into which Thomas Dylan’s son falls? The answer: to sacrifice him as part of a long-running parasitism on our world by a state religion and political power dating back to Columbus.

Make that world a dystopian version of contemporary America, set rules that allow for actual magic, and mix in some romance and Brazilian jiu-jitsu, and Thomas Dylan is off on the most transformative adventure of his life.

Perhaps some part of you will feel the same.

Posted in Blog | Tagged Empire of the Goddess, writing advice

Welcome to the Imperial Patriotic States

In the parallel America of Empire of the Goddess, the Imperial Patriotic States is a theocracy that reveres Christopher Columbus as a religious figure. I bet their July 4th is something spectacular!

Today is release day for new paperback and eBook editions. With a new cover by Deena Warner, this is the same dark fantasy novel Thunderstorm Books published last year, except it’s much cheaper, and soon you’ll have the option of listening to an audio narration performed by yours truly.

Thomas Dylan’s four-year-old son has disappeared without a trace from their Virginia home. There’s no clue what happened until Thomas is also abducted—by robed priests with electric cattle prods.

They take him through an interdimensional portal to a parallel America. There, the priests rule the Imperial Patriotic States, a backward nation suffering from horrific plagues. Healing comes not from medicine but from the Goddess, who dispenses favor in exchange for human sacrifice. The victims come from our world.

Thomas searches for his son, who he hopes is still alive. Along the way, he’ll encounter revolutionaries, romance, and magic. He may prove to be the one person who can stop the sacrifices. But this means deciding whether to find his son or save two worlds.

“Empire of the Goddess has some of the most exciting beginning chapters I’ve read in a long while, and the pace never lets up from there. Matthew Warner’s considerable horror-writing chops ensure that Empire of the Goddess is an effective and frightening alternate-world nightmare — highly recommended!”
— Norman Prentiss, author of Odd Adventures With Your Other Father and The Apocalypse-a-Day Desk Calendar

Book Talk on Sat. at Middlebrook

This Saturday at 1 p.m., I’ll be a guest at the Middlebrook Library in Middlebrook, VA. I’ll talk about writing (such as that mail-order service all writers subscribe to for their ideas, of course), and Empire of the Goddess. RSVP here. 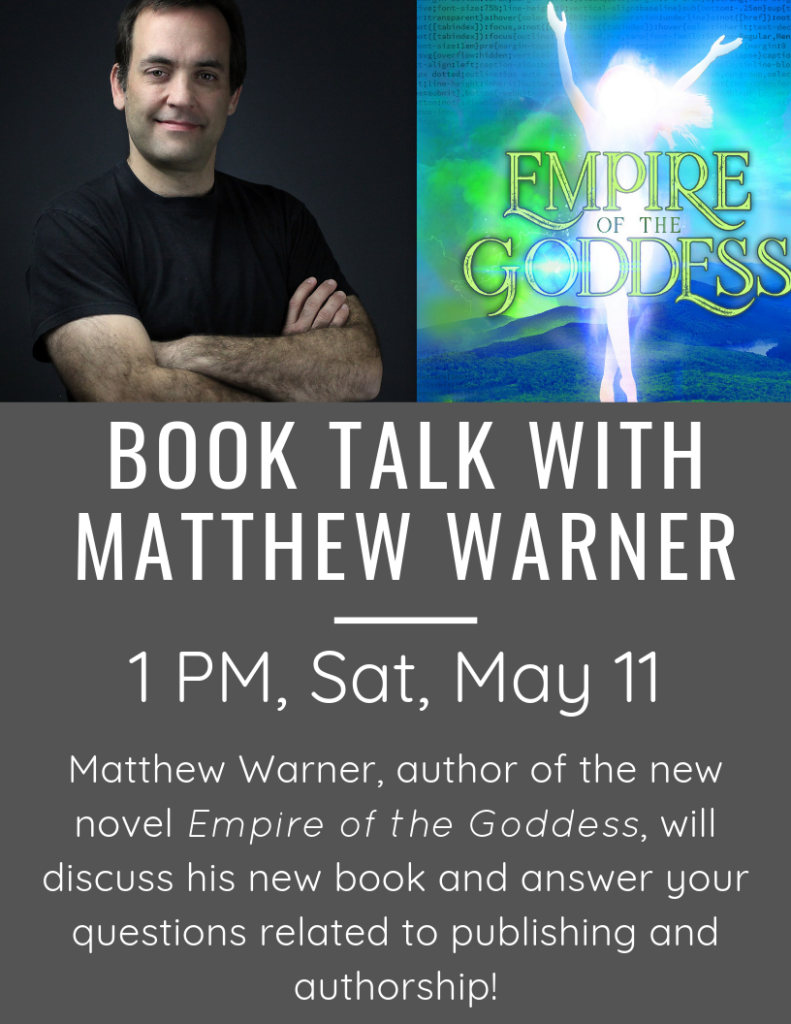 Posted in Current News | Tagged Empire of the Goddess
1 Comment

Previously issued as a limited edition hardcover from Thunderstorm Books, three all new editions of Empire of the Goddess are coming your way July 4th: 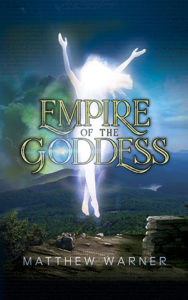 The eBook is currently available for preorder from Amazon. Click here to purchase.

Thank you to everyone who has expressed an interest in these new editions. More information soon!

Empire of the Goddess includes a chapter in which Thomas, my main character, encounters the government’s dubious eminent domain efforts to clear the way for a gas pipeline. I was doing a one-off concerning the real-world Atlantic Coast Pipeline, Dominion Energy’s prospective construction of which farmers and local governments have resisted for years. It’s easy to spot all the “No Pipeline!” yard signs in my town.

On the parallel world of Terra, its prospective pipeline won’t channel natural gas but oil created from pig manure. The “pig shit oil” pipeline, the farmers call it. The government’s solution to eminent domain is to send fire engines to farms in the pipeline’s way. Instead of spraying barns with water, however, they spray structures with napalm. This leads to a really exciting chapter where Thomas rescues a . . . hey, have I mentioned you should read Empire of the Goddess?

Anyway, imagine my shock this week when I saw headlines about real-world pig shit electricity, like this one in today’s paper: “Dominion and Smithfield Foods plan to convert pig poop to power”

Smithfield Foods and Dominion Energy announced a joint venture partnership Tuesday to trap methane from hog waste and convert it into power for heating homes and generating electricity.

The article goes on to say the gas will be recovered from waste-treatment pits and “channeled to processing centers.” So that’s the part I want to know more about: channeled how? And will there be another eminent domain fight? . . . And how much napalm can a fire truck actually hold? Can Dominion give me royalties for the pig shit power idea?

Posted in Blog | Tagged Empire of the Goddess, politics

This morning, I had a great time as a guest of Rockbridge County High School in Lexington, VA, where I gave a presentation about audiobook production. After all, audiobooks are about all I’ve been doing for the past year! Thanks to Dave Simms for setting it up. Here’s a snap Dave took of the class; I’m the guy at the end of the arrow: 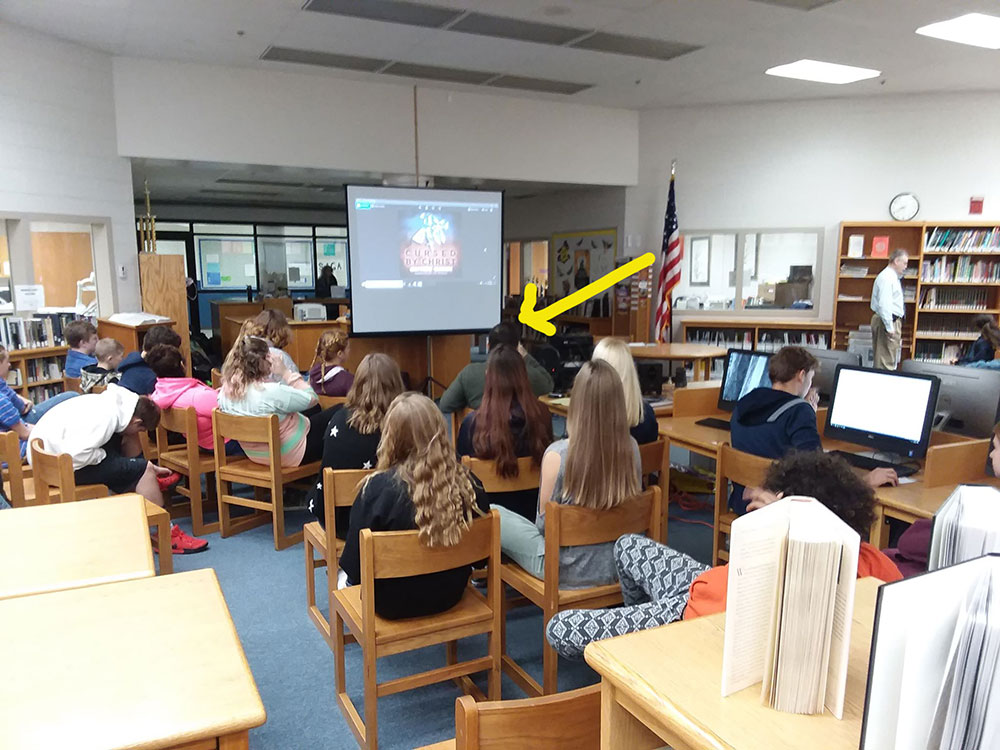 I played them bloopers from the production of the Cursed by Christ and Empire of the Goddess audiobooks, and discussed what I’ve learned the hard way about best practices. One lucky guinea pig student even got to use my audio rig to record some narration. Using a projector so they could see what I was doing, I showed them how to edit the narration in the Audacity sound program. Fun time all around.

Here’s a Larry King-esque collection of thoughts for today:

— The Traipse/WQSV Treasure Hunt begins in Staunton again next week. Last year, my family spent a lot of blood & sweat to win. (Writeup) Of course, we plan to win again this year. It was a lot of fun, and I hope fellow Stauntonites will give us some friendly competition.

— Cursed by Christ is doing surprisingly good sales-wise, despite it being my first self-published title. I’ll be a guest speaker at Rockbridge County High School on on Oct. 19, where I’ll share what I’ve learned about audiobook production. Do ya think Empire of the Goddess has a similar destiny?

— Brazilian Jiujitsu continues to teach me virtue in addition to the ability to choke someone unconscious. Recently, gratitude and humility have been on my mind. For instance, when someone beats you at something, it’s okay to congratulate your opponent on their success and ask them to teach you. “Ow, ow–tap! That was awesome! How did you do that?” All in the same breath, even. (Maybe without the “ow, ow” next time.) I offer this wisdom not only to fellow martial artists but to anyone in any context. Politicians, particularly.

And if you’ve ever had a good teacher, it’s okay to tell that person so. It’s okay to recognize they’ve enriched your life in some way. Teachers, on the other side of the table, can make that connection easier by not humiliating the person who has already humbled himself. The proper answer to, “Your support has meant so much to me,” or to any expression of friendship, is, “Thank you.” Nothing else.

Posted in Blog | Tagged BJJ, Cursed by Christ, Empire of the Goddess 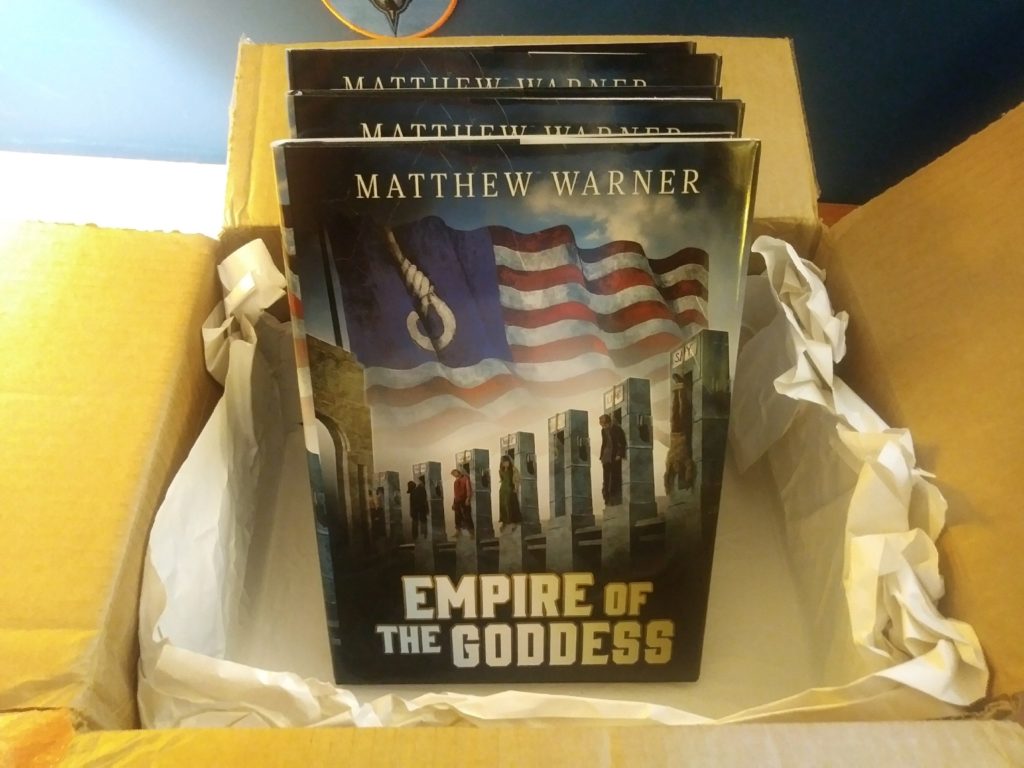 Posted in Blog | Tagged Empire of the Goddess

EMPIRE OF THE GODDESS Hardcover in Stock

Thunderstorm Books now has the hardcover edition in stock, with shipping to begin today! The Black Voltage edition is limited to only 52 signed copies. Order yours at the Thunderstorm website.

EMPIRE OF THE GODDESS Sold to Thunderstorm Books

I’m proud to announce another novel sale, Empire of the Goddess to Thunderstorm Books. It will come out this fall as a limited edition hardcover.