With all the other recent book news, I hope you didn’t forget about this one. The Horror Fiction Review just called The Organ Donor: 15th Anniversary Edition “seriously good stuff!”

New reviews of THE ORGAN DONOR

The 15th anniversary edition of The Organ Donor has finally received a few reviews on Amazon and from a book critic at Uncaged Book Reviews. It’s always nice when readers say they needed a hot bath and chat with a therapist afterward. Find out what you’re missing.

Interview by The Ginger Nuts of Horror

The Ginger Nuts of Horror sat down with me for “Five Minutes” recently for a chat about The Organ Donor: 15th Anniversary Edition and what else I’m up to. Read the interview here, and check out their cool graphic!

FeoAmante’s Horror Thriller just published a massive interview with me about the new edition of The Organ Donor. Learn about my real-life encounter with China’s organ trade, which resulted from all the foolish things I did to promote the 2002 edition. You don’t want to miss this one! Click here to read it.

Synopsis:
They knew it was wrong to purchase a kidney off the Chinese black market. But what the Taylor brothers didn’t realize was that its unwilling donor was an executed prisoner—and an immortal being from Chinese mythology. Pursuing them to Washington, DC, this ancient king will stop at nothing to recover what was once his.

“I couldn’t believe how good it was. … Matt Warner took the used up idea and sowed a story full of old myths born anew. … Warner has written a classic of modern horror literature. I’ve read it 3 times now.” — Eddie “Feo Amante” McMullen, Jr.

Get a Preview of the Afterword

Subscribers to my free email newsletter will receive a preview excerpt of the new afterword to THE ORGAN DONOR: 15TH ANNIVERSARY EDITION when it ships (projected for Nov. 25). Learn all kinds of sordid stuff about me and the book. So follow this link to sign up!

Bloodshot Books has put the eBook edition of THE ORGAN DONOR: 15TH ANNIVERSARY EDITION up for pre-order. Trade paperback edition will be up for pre-order a few days before the book’s release later this month. Click here to pre-order at a pretty damn reasonable price of $3.99; remember that it includes nearly 7,000 words of new material.

I had better get busy proofreading that eBook file! While I work, here is a sneak preview in the form of a book trailer filmed by the estimable Darkstone Entertainment of Charlottesville, VA.

Bloodshot Books has unveiled the cover for the 15th anniversary edition of my first novel, THE ORGAN DONOR. He wisely hired Deena Warner to create the cover image and design. It’s a beautiful piece of art.

Deena also released a cool “behind the scenes” essay about how she created the cover. Read that by clicking the below image:

Finally, a cool new book trailer is in the works in cooperation with Darkstone Entertainment. Here’s a production still of Mike Nguyen playing Shen: 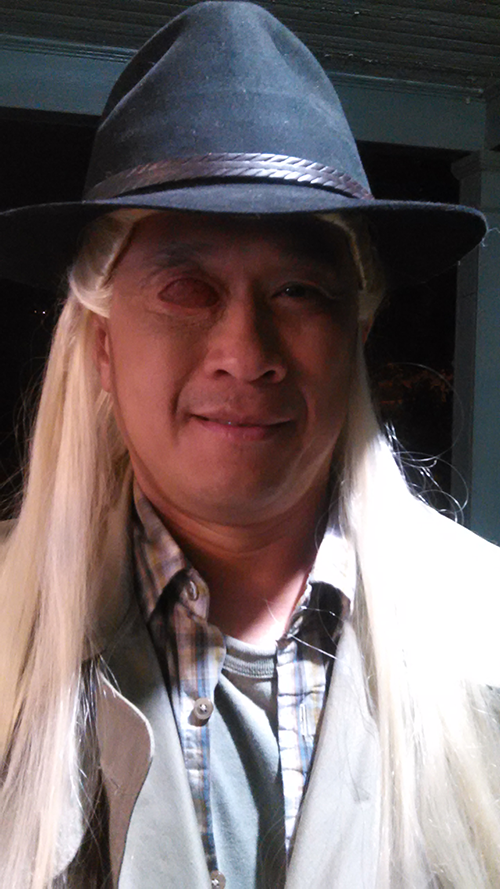 More info on that and the book’s exact release date soon!

What the Heckfire I’ve Been Doing

It’s been a while since I posted anything here, but rest assured my little elves are hard at work on goodies for you. Here’s an update.

The Organ Donor
The 15th anniversary edition of my first novel, The Organ Donor, is on track for a November release from Bloodshot Books. I went all self-indulgent with this one, penning a 6,000-word afterword for the new edition, laying out the whole sordid story about my real-life encounter with Chinese organ trafficking. The publisher hired the estimable Deena Warner to do the cover art and design, which I hope to show you soon. I’m again working with filmmaker John Johnson to foolishly spend any royalties I earn from this edition on a fun book trailer. (Watch past book trailers at this link.) More information about The Organ Donor.

The Dagger of God
The what?! What ‘chu talkin’ about, Willis? That’s right; there’s another novel in the sausage-making factory. This one is a trunk novel, a ghost story about the Civil War, Ku Klux Klan, and ugly racial violence. As if that’s topical. I enjoy reading/performing stories, so I’m trying something new: recording my own audio book. It’s been a fun experiment so far but fraught with frustrations as my basement office isn’t exactly a sound booth (chugga-chugga laundry machines behind me, and idiot felines scratching on my window screen), and my microphone picks up every breath pop, inhalation, and squishy lip parting that I make. Probably the most successful aspect of this venture will be the blooper reel. There’s also the challenge of keeping character voices distinct. My main character is a Southern belle who alternately sounds like Scarlett O’Hara or Matt-Warner-forgetting-his-character’s-voice. But when it’s done, I nevertheless intend to release it on the Amazon ACX platform and possibly on Youtube. If successful, it will make one long car trip bearable for you. Listening to an audiobook really is the best way to travel.

And on the personal front . . .
The website design business keeps the “busy” in business. I mean, day-um. Deena Warner Design continues to be in high demand for author websites. I’m also spending a significant portion of time working for First Arriving, a marketing firm in high demand for fire department websites. My writing career currently occupies the 530-630am hour most weekdays, and these two firms occupy everything else — that is, everything not taken up by my high-energy 6- and 8-year-old boys, who are scary smart.

On top of all that, I’ve become ever more entrenched in Total Defense Martial Arts, which provides boxing and Brazilian jiu-jitsu instruction to the Staunton area. Starting in January, I’ll assume primary responsibility for teaching BJJ to kids between 6 and 16. I’m also in talks with Staunton Montessori School to volunteer for two months as a self-defense instructor to 7-9th graders, teaching them the joys of escaping headlocks, bear hugs, and chokes.

That’s about it. Please stay tuned for all the happenings this fall.