The Making of No Outlet

Two lucky readers won a $25 gift card to Thunderstorm Books. Who were they? 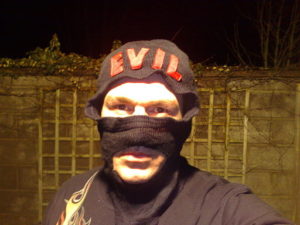 While teaching creative writing a few years ago, I told a class of seventh graders a deliberately bad “story” of how I arrived there that morning. It went like this:

Mr. Warner got into his car to drive to the creative writing class. On the way, a telephone pole dropped across the road, blocking his way. He drove around it. Soon, a tractor trailer jackknifed on the interstate, causing a multi-car pile up. Mr. Warner almost wrecked his car. But he drove around that, too, and continued on his way. Then, a UFO descended out of the sky and tried to stop him by lasering his right-front tire. But Mr. Warner put on the spare. Finally, he reached the school and taught the class. Everyone was very happy he made it.

When I was done, I grinned at the assembled students. I made sure to look especially smartassed and know-it-all, because I don’t get to do that very often. “What do you all think of that story?”

After a long silence, someone said, “It needs ninjas.”

Most of us had a good laugh. But I think that first kid was deadly serious about the ninjas, as one should be. I did have a point, however, for once. To make it, I told the story a different way.

The morning Mr. Warner was to teach the creative writing class, he refused to get out of bed. “My students will never learn these things. There’s no point in getting up.” But his wife encouraged him to go, saying, “You need to do this.” So he started driving. A telephone pole soon dropped across the road, blocking his way. To him, the pole looked like the hand of God, saying, “Go No Further.” He almost turned around, but he remembered his wife saying, “You need to do this.” Then, a few miles later, a tractor trailer jackknifed on the interstate, causing a multi-car pile up. Some say a UFO had lasered the truck’s tires. Mr. Warner almost turned around again, but he remembered his wife saying, “You need to do this.” Still, that wasn’t good enough. Was he the one who needed to teach, or did his students need him to teach? It was the students, and it always had been. So he continued on to the school. And as he began the morning’s lecture and saw how his students needed him, he felt his own need to teach reawaken in response. Maybe his wife was right after all.

Was that a little too pat? Sure. Did it provoke an eye roll and a mocking, “Aww!” from you? Yes. Same here, and I wrote it.

Still, I hadn’t put the class completely to sleep, so I asked them if the story was better.

“Sure,” they said. (And rolled their eyes, of course.) But I pressed them until they admitted it was marginally better.

“What was different about it?”

They gave various answers: dialogue, a secondary character, symbols, stuff like that. Then somebody spoke that magical phrase: character arc. The Mr. Warner of my story was different at the end of the story than he was at the beginning.

What Good Writing Should Have

And that’s what I think good story writing — or at least better writing — boils down to. Why the hell should you read my new novella, No Outlet, and about its main characters, Steve and Tanya Clarke 1, unless it concerns the most significant event in their lives?

Think for a second what makes events personally significant. It is because they’re supposed to be important, like that walk across the high school graduation platform? I hardly remember receiving my diploma. I wore a purple robe and didn’t know what to do with my mortar board hat’s tassel, and that’s about it. But you can bet your ass I remember my first son’s birth and rocking him for the first time, bursting into tears as I said the words, “My son, my son.”

When I began writing No Outlet in 2002, I didn’t know this yet. At least not completely, not down to my core. I was only an idea writer. The idea that entranced me was taking the experience of being disoriented and lost in a shopping mall and magnifying that into the supernatural. What if the shopping mall didn’t want you to escape? Throw in a squabbling married couple — good catharsis for my recently failed relationship — and it seemed like a great story. The Clarkes are at each other’s throats, the other shoppers attack them when they ask for directions, and merry mayhem ensues.

Except I got 20,000 words into it, and the Clarkes’ story lost direction. The trouble was I didn’t know why the shopping mall had trapped them. Was it a government experiment? Was it caused by aliens? Maybe it was an outer ring of hell, or they were already dead, or . . . yeah, it’s all been done before. Shit.

A Long Gestation, Then a Happy Ending

I put the manuscript down. For nine years.

During the hiatus, I wrote 25 short stories, 3 novels, 3 stage plays, 8 screenplays, and a half dozen other one-shot things like a radio play and novelette. Occasionally, I taught short creative writing courses to high schoolers. It was during one of these that the foregoing conversation about character arc occurred.

Then, last fall, I picked back up my manuscript about the couple trapped in the shopping mall. It didn’t have a title yet, and I still didn’t have an original explanation for the shopping mall itself. But I did have nine more years of writing experience, and I felt that had to count for something. So I read it from the beginning, editing as I went, and then moved forward. I made sure not to read the list I’d brainstormed nine years earlier, the one titled “Mall Explanations.”

And soon, it hit me. That thing I’d been teaching to others. Character arc. Who was the real character in this story? Was it Steve and Tanya Clarke, or was it their relationship? And if the main character was their relationship — their marriage — how did it affect their environment and vice versa? I soon realized what I had to do.

I had to dig down to find the faith to complete No Outlet. Nine years is a long time to leave something in the womb. But I’m pleased with the result — and so was my publisher(!) — so I hope you will have that same faith in me to tell a good story. It’s available in trade paperback and limited-edition hardcover from Thunderstorm Books, with a terrific cover illustration by the most talented artist in the world. When you’re all done, please let me know if you liked the ending.

1 No relation to Stephen Clark of Tasmaniac Publications. “You have great taste in character names,” he said when I told him of the coincidence. “What’s a little disturbing is his wife’s name is Tanya . . . and my wife’s name is Tina!” Go back up.