a division of Darkstone Entertainment, LLC

The Making of The Good Parts

A man and woman with opposing time travel abilities attempt an unlikely romance.

Rob Flanigan blinks one morning in the shower and finds that he has skipped forward three hours. His shins hurt, he’s hungry, and the water is cold. Has he gone crazy?

He meets the beautiful Jennifer, the opposite of him in every respect. Jennifer can stretch her perception of time, slowing it down to a crawl. While this seemingly grants her superfast reflexes, it takes a toll on her sanity.

As their romance progresses, the two lose control of their abilities. A gulf of time and loss opens between them. Can they ever be together?

The premiere showing of my short film took place at Exile in Staunton, VA. Special thanks to everyone who made it possible. 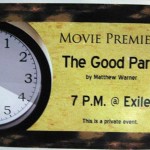 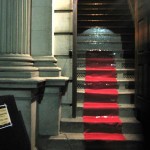 Yes, indeed, those were some steep stairs. 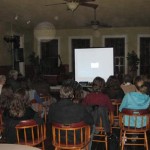 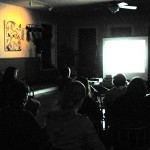 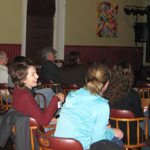 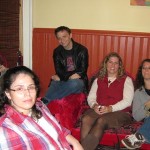 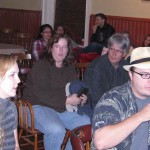 On the left is Mariah Smith of Bio Duck FX, who did the film’s makeup FX and also starred as the Doctor. Director John Johnson (wearing the hat) served as the evening’s projectionist. Seated behind John is Richard Adams, who composed the film’s theme song.

After helping with set up, Inigo (L) relaxed in the back room with Sam Banta. My wife graciously kept all the kids and babies entertained during the show. 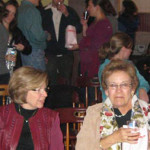