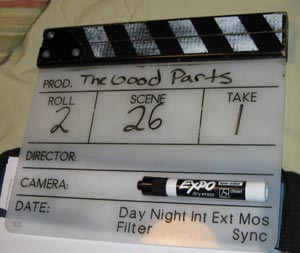 Filming of The Good Parts officially got rolling today in Charlottesville, Virginia. In the weird calculus of film making, we knocked out 40% of our scenes during just one-eighth of our time and with only one actor.

The actor in question is Mikiah Umbertis, now cast in the lead role of Rob Flannigan. (That’s Flannigan, now spelled with two Ns in the middle, because that’s the way the prop master misspelled it on two of the key props — which is fine with me because he was consistent.  But that’s Good Parts trivia item #1 for ya.) Mikiah did a wonderful job considering that he spent the whole day not sharing the screen with any other actors. To me, that would be kind of an acting nightmare, because in my limited experience, I’ve learned that it’s easier to play off of somebody else’s energy. But he pulled it off somehow.

Today consisted of a whole lot of shots of Mikiah getting in and out of bed, talking on the phone, and standing in the shower. There were also a couple dozen slow focus-ins of the movie’s all-important alarm clock. It’s here that I was able to contribute something on set. Not long after arriving at the home of Marty Moore, who generously donated the use of her house, I had to disappear into the dining room for ten minutes to straighten out the story calendar. The calendar is where we keep track of the story’s internal timeline: scenes 1-11, for instance, take place on “Monday, 6/12,” while scenes 12-19 are on “Friday, 6/16.” I made a similar calendar to keep track of time while writing Blood Born. (I think I even made one while originally writing The Good Parts.) Apparently, having this reference is doubly important on a film shoot because all your scenes are getting filmed out of order, depending on when locations and actors are available. It’s of course even more important in a film like this, which is about the passage of time itself.  With the story calendar in hand, I was able to check that the clock’s date and time was set correctly from scene to scene.  Production assistant Gary Carper spent so much time resetting the damn thing that we joked that his credit should list him as the Time Lord (with proper tribute to Dr. Who, of course).

Our last shot of the day, which was supposed to be at a bus stop, got rained out, so we headed back to Darkstone HQ to watch the dailies.  This was a good thing as my feet were killing me from standing around, hunched over the script.  Watching the day’s work was another interesting experience, as it consisted of raw footage, everything from the obligatory shot of the slate board (“Roll 3, Scene 2, Take 1”) through director John Johnson’s saying, “Cut!” . . . just like in the movies, I would say.  It’s a disconcerting experience to watch the scenes out of order, without music, and in some cases repeatedly, but I guess that’s film making for ya.

Tomorrow, we get to spend the day shooting at a construction yard and in a sandwich shop, mostly doing shots of David Harsheid, cast in the role of Rob Flannigan’s hotheaded boss, Mr. Putnam.  Harsheid was Sir Anthony Hopkins’s body double on the set of Stephen King’s Hearts in Atlantis, when it was filmed here in Staunton.  I’m looking forward to meeting him and to seeing how he interprets the role.