THE SEVENTH EQUINOX book trailer went into production last weekend with film shoots in Staunton and Afton, VA. Darkstone Entertainment of Charlottesville and its fine network of actors did the hard work while I ran around pretending to be a director/screenwriter.

Filming continues in early April at Natural Chimneys in Mount Solon with what I’m sure will be awesome makeup effects from Bioduck FX.

The target length of the trailer is just 90 seconds. Yes, that’s a lot of work for just a minute and a half. But that’s the general length of a movie trailer, and I don’t think people want to watch a commercial that’s much longer.

Distribution will be online at places like Youtube and, if the money holds out, at local movie theaters before regular shows. (Because, you know, all writers are rich. Uh huh.)

Here are some photos from the weekend. Enjoy! 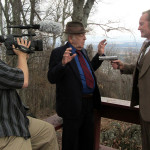 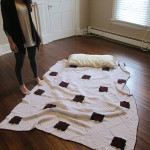 Elle Clark, playing Bessie, stands next to the guest bed she’s prepared for Robin. We call that Southern hospitality. 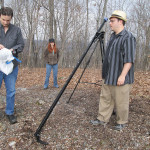 Jarod Kearney, Brandy Mason, and John Johnson work with camera equipment in the rain. That weird lever thing is a camera jib on loan from Brian Wimer of Amoeba Films.