Filming for THE SEVENTH EQUINOX‘s trailer continued Friday with a shoot at Natural Chimneys near Mt. Solon, VA. This is a beautiful park and camping area featuring 120-tall limestone “chimneys” created by erosion.

The chimneys are yet another local landmark the trailer will feature, showcasing all the locations that inspired me in the book’s composition. Other set locations include Staunton’s famous Clock Tower, Betsy Bell Mountain, and the condemned DeJarnette State Sanatorium (also known as the “children’s asylum”).

The day started this time with an hour-long makeup session with Mariah Johnson of Bioduck FX. Mariah did her magic on actor Sam Lukowski to create a burn wound from a lightning strike.

We then traveled to Natural Chimneys to film Sam, playing Robin Goodfellow, deliriously stumbling into a cave. From there, Robin is destined to meet divorcée Bessie Henderson and ask for her help.

Here are a couple photos from Friday. Enjoy! (Click to enlarge.) 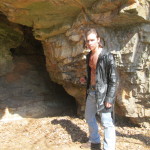