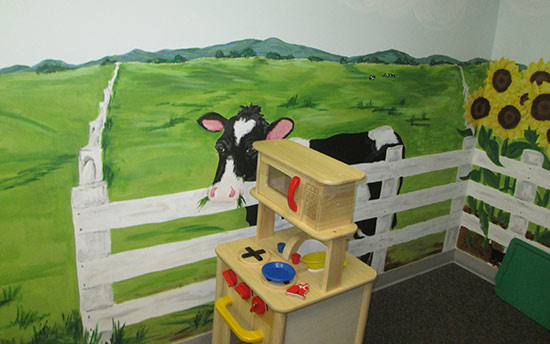 This mural inspired the short story in EULOGIES II, now out from HW Press. It’s in the children’s play area at the Staunton Public Library.

Here’s how it starts:

The mural in the children’s play area of Augusta City Library normally featured what you would expect. A cartoonish cow stood in a field bordered by a split-rail fence. But today, a shadowy figure with wings walked on the horizon.

Huh. And just now, I see that the original isn’t really a split-rail fence. At least not all of it. Oh, well. I never said Augusta City was a one-for-one copy of Staunton. (Stay away from that mayor, by the way, unless you’re wearing rubber shoes.)

Do you see the shadowy figure with wings? Maybe if you keep staring. . . .

One thought on ““Muralistic” Behind the Scenes”