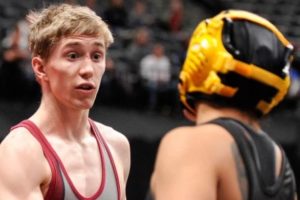 What’s wrong with refusing to grapple with a girl in high school wrestling when you’re a boy? Everything.

The Washington Post and The Denver Post yesterday reported on 18-year-old Brendan Johnston’s quandry when faced with the prospect of facing Jaslynn Gallegos for a high school wrestling bout. The competition would have brought him one step closer to a Colorado state wrestling championship, but instead, he decided to forfeit. Johnston cited unspecified religious beliefs for his decision and also a reluctance to show physical aggression toward a female. He’s done this with other female wrestlers, too, and been praised for it. As the news outlets detail, this is emblematic of a larger debate about the 17,000 girls nationwide in scholastic wrestling.

Speaking as a former two-year high school wrestler and now a six-year Brazilian jiu-jitsu practitioner, I have problems with his decision on many levels.

On the personal level, it dishonors both wrestlers. It makes us wonder if Johnston’s real reason was that he was a coward, afraid of losing to — and therefore feeling emasculated by — a girl. And by robbing the girl of her chance to compete, it leaves her — and us — to doubt the legitimacy of any subsequent victory; i.e., the only reason she can now step closer to the championship is because someone gave her a “bye.”

On the gender-relations level, it dishonors men through guilt by association. In this context, men are once again choosing for a women what she may or may not do with her body. If a female chooses to use her body in a grappling sport — or any sport — then who are you to take that away? Johnston said he doesn’t want to show physical aggression toward a female off the mat; fair enough. But on the mat? That’s the nature of the sport, and girls who wrestle have made that choice.

And on the commonsense level, the decision is illogical. The online comments to the above news articles give at least two main points to unpack.

But don’t take my word for it. Go observe a martial arts class or a wrestling practice. Talk to the women you see there. And for bonus points, put your own butt out there on the mat and experience it for yourself.