“The thing this mead hall is missing is walls,” I said.

Of course, it was a picnic shelter at Montgomery Hall Park, but otherwise the mead hall illusion held. My mother-in-law heated mulled cider in a crockpot, and my father-in-law heated us all with a fire in the shelter’s fireplace. My wife said a piece of forked firewood reminded her of wooden pants, so when her dad threw it into the fire, my thoughts led naturally to Boba Fett.

As you know, Boba has just effected a memorable resurrection in the Star Wars universe. Turns out he escaped the Sarlacc pit. He’s now on his way to a glorious future in a time long, long ago.

When Return of the Jedi came out in 1983, I had to have the Boba Fett action figure. What with that cool helmet and the rocket on his back, and the fact he could fly, who wouldn’t want him?

That winter, my job was to stack wood in the fireplace and stuff wadded-up newspaper below the andirons, and then, when it was time, to strike a foot-long match to light those newspapers. Except, on this particular night when I was 10, I accidentally rolled Boba Fett into a newspaper blanket and shoved him into the fireplace as well.

I realized my mistake when I spotted him aflame, his legs incinerating like Anakin Skywalker’s at Mustafar. We rescued him from the fire — but too late.

I mourned my deformed, favorite Star Wars figure. There was nothing Dad could do for him but use a pocket knife to amputate him below the waist.

Legless Boba Fett just wasn’t the same anymore. There was nothing more to do for him but grant him a dignified burial at kitchen trash.

Luckily, a family friend owned an extra Boba Fett and gave him to me. My favorite action figure was restored.

So as we celebrate this holiday season, whatever holiday you may celebrate — for us, it was a winter solstice in a wall-less mead hall beneath a planetary conjunction — I wish you a merry resurrection of your action figures and a hope for a restoration of all important things in the coming year.

What the Heckfire I’ve Been Doing

It’s been a while since I posted anything here, but rest assured my little elves are hard at work on goodies for you. Here’s an update.

The Organ Donor
The 15th anniversary edition of my first novel, The Organ Donor, is on track for a November release from Bloodshot Books. I went all self-indulgent with this one, penning a 6,000-word afterword for the new edition, laying out the whole sordid story about my real-life encounter with Chinese organ trafficking. The publisher hired the estimable Deena Warner to do the cover art and design, which I hope to show you soon. I’m again working with filmmaker John Johnson to foolishly spend any royalties I earn from this edition on a fun book trailer. (Watch past book trailers at this link.) More information about The Organ Donor.

The Dagger of God
The what?! What ‘chu talkin’ about, Willis? That’s right; there’s another novel in the sausage-making factory. This one is a trunk novel, a ghost story about the Civil War, Ku Klux Klan, and ugly racial violence. As if that’s topical. I enjoy reading/performing stories, so I’m trying something new: recording my own audio book. It’s been a fun experiment so far but fraught with frustrations as my basement office isn’t exactly a sound booth (chugga-chugga laundry machines behind me, and idiot felines scratching on my window screen), and my microphone picks up every breath pop, inhalation, and squishy lip parting that I make. Probably the most successful aspect of this venture will be the blooper reel. There’s also the challenge of keeping character voices distinct. My main character is a Southern belle who alternately sounds like Scarlett O’Hara or Matt-Warner-forgetting-his-character’s-voice. But when it’s done, I nevertheless intend to release it on the Amazon ACX platform and possibly on Youtube. If successful, it will make one long car trip bearable for you. Listening to an audiobook really is the best way to travel.

And on the personal front . . .
The website design business keeps the “busy” in business. I mean, day-um. Deena Warner Design continues to be in high demand for author websites. I’m also spending a significant portion of time working for First Arriving, a marketing firm in high demand for fire department websites. My writing career currently occupies the 530-630am hour most weekdays, and these two firms occupy everything else — that is, everything not taken up by my high-energy 6- and 8-year-old boys, who are scary smart.

On top of all that, I’ve become ever more entrenched in Total Defense Martial Arts, which provides boxing and Brazilian jiu-jitsu instruction to the Staunton area. Starting in January, I’ll assume primary responsibility for teaching BJJ to kids between 6 and 16. I’m also in talks with Staunton Montessori School to volunteer for two months as a self-defense instructor to 7-9th graders, teaching them the joys of escaping headlocks, bear hugs, and chokes.

That’s about it. Please stay tuned for all the happenings this fall.

This has been a thin summer for me news-wise as I’ve been loading the metaphorical gun with more stuff to fire at you down the road. Another novel is in the can and with beta readers, and I’ll soon begin work on a long short story that’s been commissioned by a specialty publisher. Mark your calendars for Oct. 1, when I’ll be a guest at Con of the Mountain in Clifton Forge, VA.

Here’s the newest stuff in print. Do yourself a favor, and check it out, eh?

On the personal front, family life keeps me busy. Here are some pictures. Enjoy! 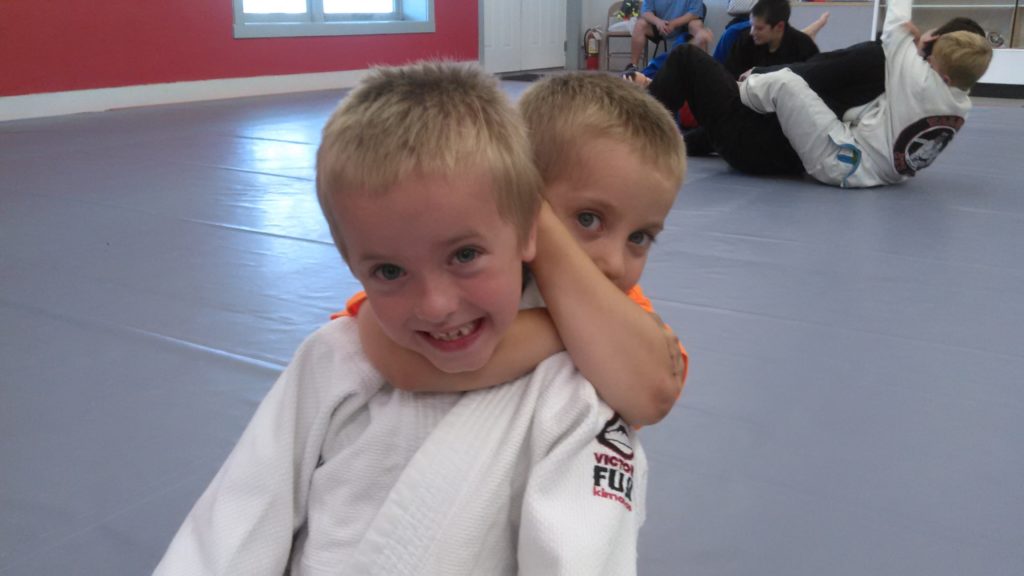 This week, my youngest son Thomas (5) had his first lesson in Brazilian jiu-jitsu. Here he is applying a rear-naked choke to his brother Owen. 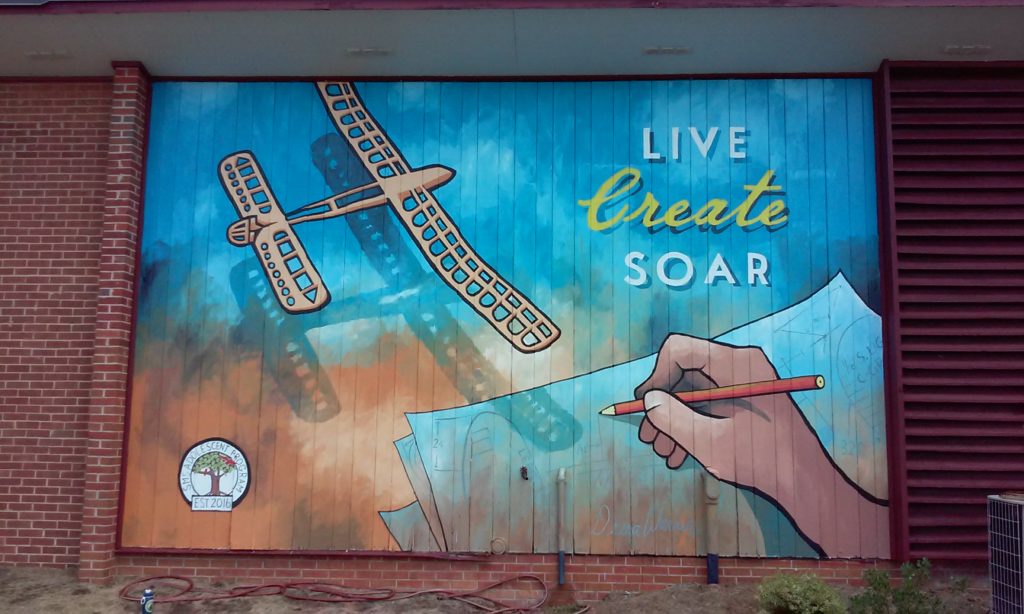 My wife, Deena, painted this gorgeous mural on the front of our sons’ school. 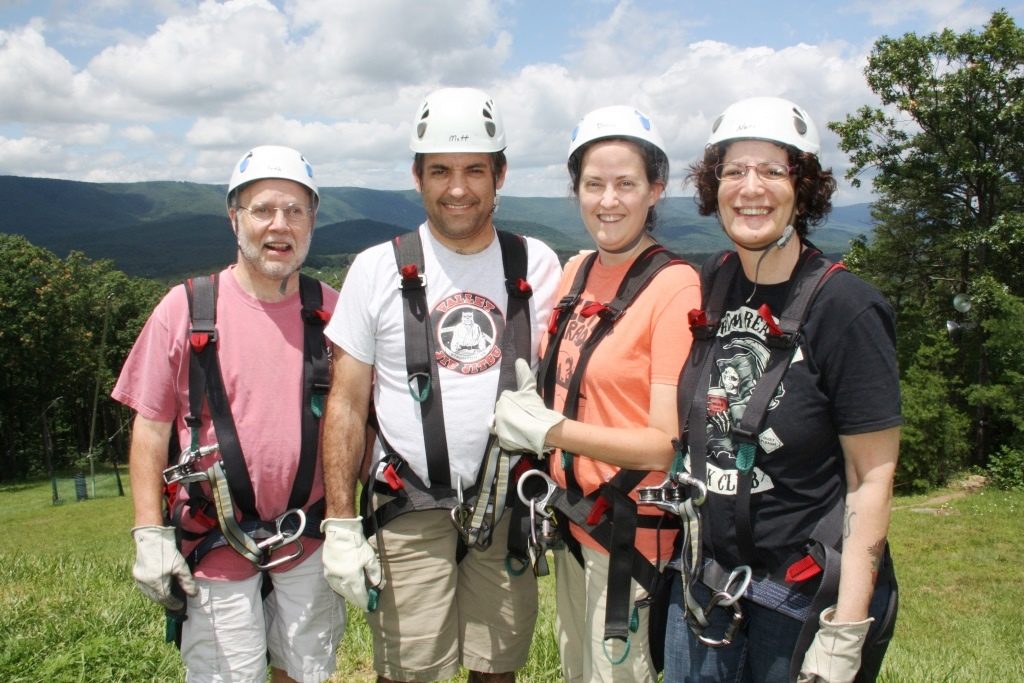 Deena and I spent a day ziplining at Bryce Resort with our good friends Keith Minnion (pink shirt) and Nanci Kalanta (black shirt).

Workin’ on the Speed Bag

For my birthday a year ago, my wife gave me a boxing speed bag platform after I got hooked on the art of it at my martial arts school (Valley Brazilian Jiu-Jitsu in Staunton, VA). She also gave me the demonstration video to The Speed Bag Bible by Alan Kahn (1996). The man’s a badass! This is what my progress looks like so far. I have a long way to go.

We’re gonna have a hard time topping this one next year. Photo by Jarod Kearney Photography. 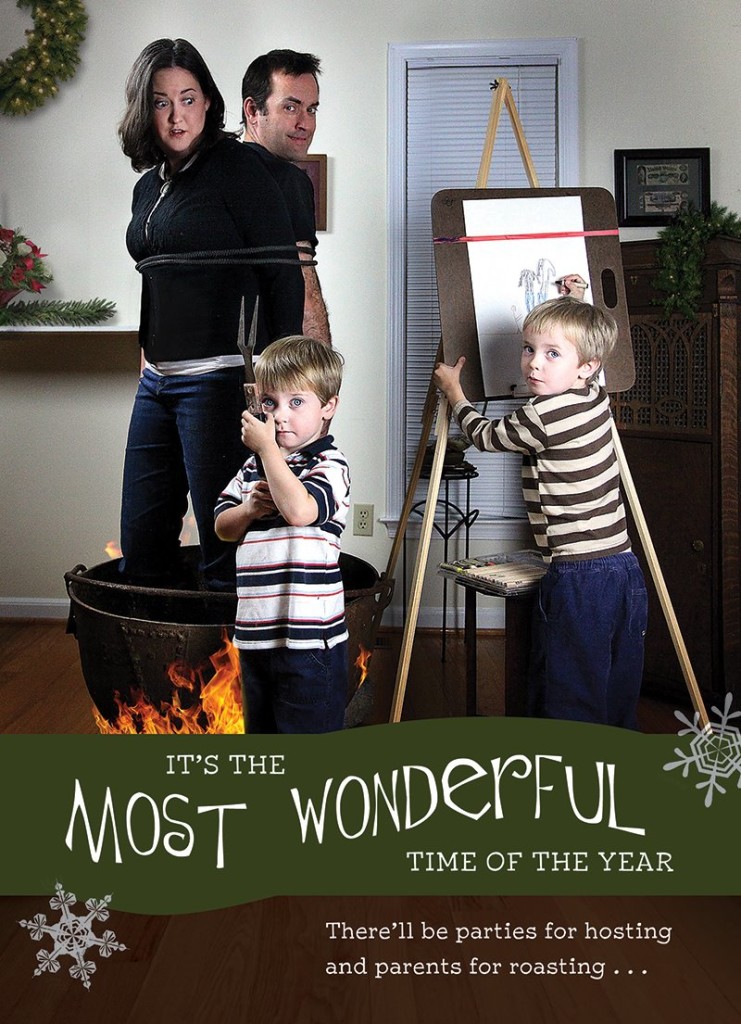 Do you know those holiday newsletters you receive from relatives, printed on pink and red paper, that go on and on about trips taken during the year? Yeah, this is like one of those, so I’ll keep it to a mere ten rambles. In 2013:

This year, I hope to have more of the same.  Best wishes for happy developments in your neck of the woods!

The other day, I sent a handwritten letter to a friend. I wrote it in cursive, in big, bold strokes. I was proud of it, in a way, because I felt I was being personal. I knew a graphologist would be able to divine the inner workings of my personality from its lines and loops. Maybe even the friend would save it and one day donate it to the future Matthew Warner Museum (you know, that mythical place in the future all writers fantasize about, except they replace the words before “Museum” with their own names). But then I remembered cursive is a dying art.

That’s actually news to me. I add it to the list of Things That Make Me Feel Prematurely Old. My odometer rolls the big 4-0 in a couple months. My nose hairs are going gray. Charlize Theron and that lunatic on this week’s Piers Morgan show are younger than me. For that matter, Piers Morgan ain’t much older than me, either. Barack Obama was about five years younger than me when he became a state senator.

I wake up in the middle of the night to pee. I need to see a chiropractor three or four times a year. I worry about colon polyps. I think about aging parents. I drive conservatively. I save for retirement.

I’m not sure what this all means. I’m not supposed to be this old.

This week, I cut my hair down to a half inch. Mortified my hair dresser. First time in my life I’ve strayed from the Elvis thickness of the 1970s. Not because I had to, due to some premature balding, but because I was curious. She said it makes me look younger. My wife was polite. My mother was horrified. As for me, well, I just think it makes my head a little cold.

So here I am. A fully grown man, I guess. I’m not sure what that means. I’m writing a novel right now — a novelization of the remake of the famous Plan 9 From Outer Space. It’s going really well. I’m applying all those skills I’ve so painfully honed for the past 20 years. And while I’ll never have the attitude that I have nothing to learn about writing, I am more aware this time than ever before that I don’t have anyone showing me what to do. I’m not in school anymore. I’m just fucking doing it, flying solo. Writing a novel is always an act of faith in oneself, ultimately, and that’s a bit scary.

Ha ha! My year-end wrap up is the first one out! I beat all you bitches to the end of the year! In your face!

And you know why? Because I’m actually writing this from the future. It’s January 2013 here, and through the magic of my blog’s “scheduling” feature, I’m able to publish this entry in the past. That’s right; my website skills are that badass.

Oh, yeah, sorry. The news. Yes, we survived the Mayan apocalypse. (This was thanks in part to Desmond Miles, who touched the silver sphere of bad writing and protected us from the solar flares. Or something.)

But below is the real news, the headlines that matter most to me:

In 2013, there will be things like a new novel published (more on that later) and other ongoing writing projects. And since I just now read my 2013 summation, written by my future self, I expect it all to go swimmingly.

Continuing in the tradition of the Larry King-esque mental burps I followed last year at about this time, I offer for your consideration a list of 2012 agenda items: