Like the first domino in a chain, the most traumatic episode of a person’s life shapes all things to come.

For a fashion model, the key event is a repulsive facial blemish caused by a photographer with an unusual camera. For a man in a post-apocalyptic shelter, it’s the need for emergency medical attention from the last remaining doctor: his ex-wife. For a homeless man, it’s the realization that the backward-walking man beside him controls world events from his park bench.

Matthew Warner ranges from the 19th to the 43rd century in this collection reprinting eighteen horror and science fiction stories. In the foreword and story notes, Warner describes how his life inspired these tales of infidelity, parenthood, and death. It includes some of his most popular stories, such as “Backwards Man” and “Second Wind.”

The Joy of Parenthood

And That’s When the Bathroom Exploded

Noah’s Temple
Die Not in Vain

“Matthew Warner’s collection, Dominoes in Time, not only shows tremendous range and skill, it’s like the best of Stephen King: ordinary characters (albeit unique in their own way) demand our sympathy and interest while, at the same time, they find themselves in extraordinary circumstances. Warner’s imagination is vast, and these stories leap off the page, staying with the reader in mind and heart. A highly recommended group of tales by a virtuoso writer.”
— Lisa Mannetti, three-time nominee and winner of the Bram Stoker Award, author of Deathwatch and The Box Jumper

“Matthew Warner has penned an impressive collection of tales that will transport you to places and scenes you’ve never imagined. … Matthew Warner has such a variety of ideas collected here, that I am certain every horror fan will find something that resonates with them. Highly recommended!” 4.5 stars
— Horror After Dark

“Although he’s an accomplished novelist and has written screenplays he really shines as a short story writer. … this is very much worth your time and money.”
— Jim Morazzini, Beneath the Underground

“18 pivotal experiences light up the landscape for a delightfully eclectic cast of characters in Warner’s new collection of short stories. … With no attempts to cater to the politically correct or even polite, the story’s gritty language is part of this author’s hallmark style.”
— Lisa Rochford, News Leader

“Dominoes in Time is a fantastic collection, and proves that the author should be front and center in dark fiction.”
— Sheri White, The Horror Review

“DOMINOES IN TIME showcases Warner’s ability to pen authentic paranoia from many different angles (his 2006 novel EYES EVERYWHERE will be of interest to those interested in the subject) and his blending of the macabre with some finely placed humor makes this collection sing. At times reminiscent of classic Twilight Zone episodes, Warner’s stories are engaging and more often than not will take you places you didn’t see coming.”
— Nick Cato, The Horror Fiction Review

“Each story in Dominoes in Time is a dark gem — cold, sharp, and filled with sinister wonder.”
— Tim Waggoner, author of The Way of All Flesh

“My first instinct is to go out and buy everything I can find by Matthew Warner, because all I want is more. My second is to tell you to do the same. To say that this man can write is an understatement. His prose is brilliant, witty, and unabashedly his own.” 5 stars
— Andreya’s Asylum 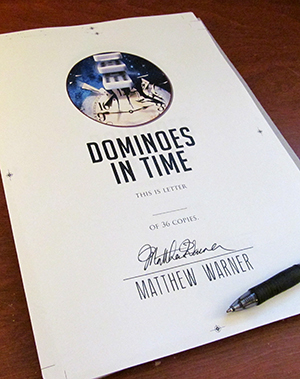 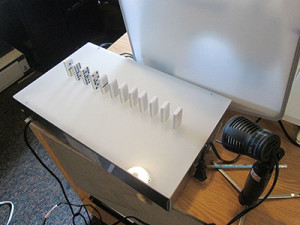 Behind The Scenes: Dominoes In Time

On Aging and a Writer’s Job

The audience was also treated to Jay wristlocking me live on camera! Watch the archived interview.