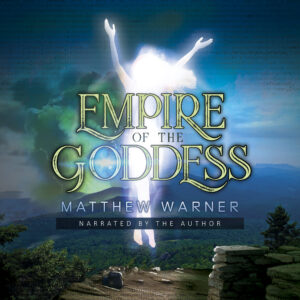 It was recorded by none other than the book's narrator, Thomas Dylan, and he … Read more.
All News Articles

Empire of the Goddess

Thomas Dylan’s four-year-old son has disappeared without a trace from their Virginia home. There’s no clue what happened until Thomas is also abducted—by robed priests with electric cattle prods.

They take him through an interdimensional portal to a parallel America. There, the priests rule the Imperial Patriotic States, a backward nation suffering from horrific plagues. Healing comes not from medicine but from the Goddess, who dispenses favor in exchange for human sacrifice. The victims come from our world.

Thomas searches for his son, who he hopes is still alive. Along the way, he’ll encounter revolutionaries, romance, and magic. He may prove to be the one person who can stop the sacrifices. But this means deciding whether to find his son or save two worlds.

“Part adventure story, part political polemic, but completely entertaining, Empire of the Goddess is an important book and one that should be read by all concerned individuals in our troubled times. Think vintage Heinlein at his very best.”
— Horror Drive-In

“Empire of the Goddess has some of the most exciting beginning chapters I’ve read in a long while, and the pace never lets up from there. Matthew Warner’s considerable horror-writing chops ensure that Empire of the Goddess is an effective and frightening alternate-world nightmare — highly recommended!”
— Norman Prentiss, author of Odd Adventures With Your Other Father and The Apocalypse-a-Day Desk Calendar

“This guy knows what he’s doing, and it is super-obvious in his work because this book is amazing. … The story is phenomenal.” 5 Stars.
— Tremendous Book Reviews

Recommended Reading by the True Review

A Step-By-Step Guide to Swearing at Your Cats

Inspiration for Empire of the Goddess

“Empire of the Goddess” (aired on Rolling Rocks Radio)

“Lures” by Jay Haynes, a scene from Chapter 1, shot on the actual street that inspired the scene