EMPIRE OF THE GODDESS Photo Essay

Here are some images that inspired me while writing the novel. Enjoy! 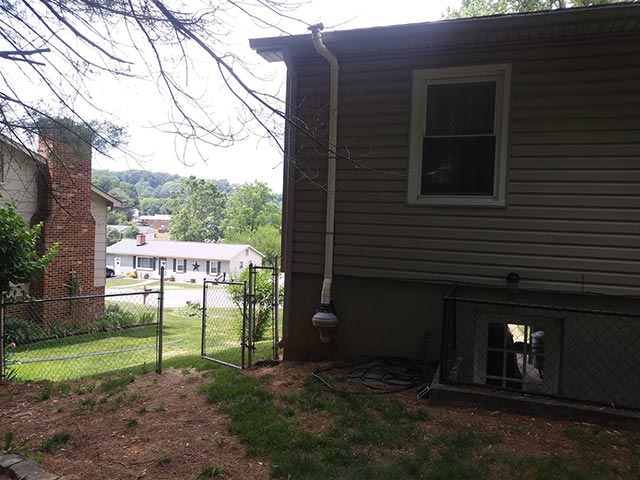 From the book’s opening scene:

The day he disappeared, my four-year-old son, Walter, asked to mow the yard with scissors.

“Sure. Just stay clear of the lawn mower when I come around, okay?” As I spoke, I finished a pass across the back yard of our Virginia home. I turned my push mower around for the next one. …

Squealing, Walter unlocked the gate on his way to the front yard.

This is simply an image of the back gate at my house here in Staunton. It’s taken from where I imagine Thomas Dylan stood during that scene, his hand on the lawnmower, as Walter opened the gate on his way to the front. I’ve always found this sight to be somehow sad and final without knowing why. Thomas knows why. 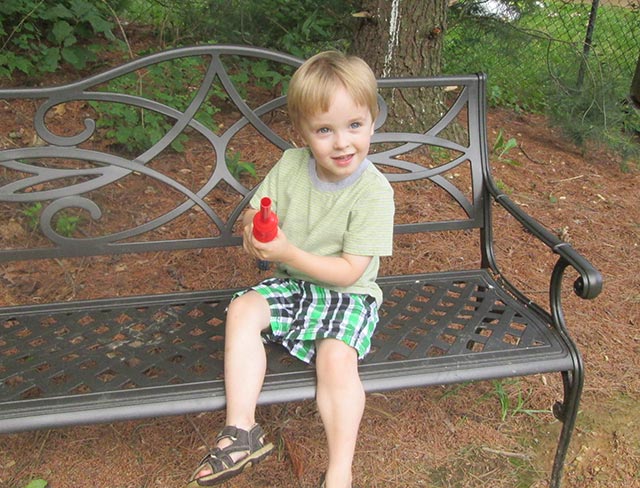 “Have you seen my son? Little boy with blond hair?” I held a hand level with my stomach to show how tall he was.

Here’s a picture of my son Owen at age four, so precious it makes my heart break just to look at him.

I looked in that direction and saw the distortion of a heat mirage. The same as before. It moved down the street like a giant ocean wave.

Except it couldn’t be a heat mirage. It was only seventy-five degrees outside. I lived on Star Trek episodes once upon a time, and this bulge in the air reminded me of the passage of a cloaked spaceship.

Maybe it was a cloaked van—the one responsible for snatching my little boy.

This video by Jay Haynes dramatizes what this scene might look like. The heat distortion moves down Ritchie Road toward the woods that are the Border Between Worlds. 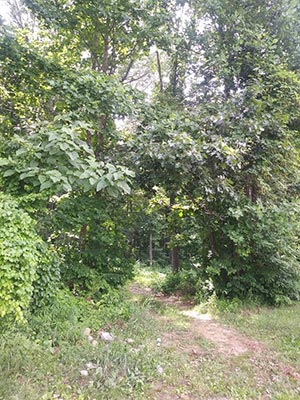 I crossed the vacant lot’s weeds and piles of gravel and entered the woods. … The brush gave way to a wide trail that ran up and over a rise. I didn’t remember the trail, but that didn’t matter now. … Clover covered the ground. I didn’t normally pay attention to such things, but its thickness seemed strange. When I stooped to look, I figured out why.

At the end of Ritchie Road sits the vacant lot that sparked my attention on that long-ago day of woolgathering. The kids like to visit it during family walks, calling it “the jungle.” Through that trail entrance pictured here, you access a trail beneath old phone lines that go up and over that hill, seemingly to another world. In Thomas Dylan’s Staunton, it really does lead to another world. 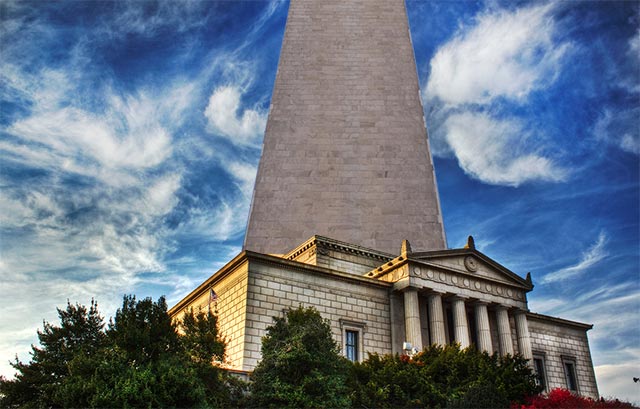 Having grown up in the D.C. suburbs, I recognized the Washington Monument immediately. The monolith of white stone, built in the 19th Century, stood over five hundred fifty feet tall.

This one was at least twice that height.

Lit by red flood lights, it rose like a magnificent, bloody finger into the night. Unlike the Monument I remembered, this one stood upon a square building of white stone and Corinthian columns. It was the lower half of the Masonic Temple from nearby Alexandria, Virginia—except larger.

This is a cleaned-up version of the Photoshop sketch I created for my own reference while writing this passage. It’s simply an image of the Washington Monument planted upon the Masonic Temple in Alexandria. In the novel, this is the Washington Temple in Washington, DC, residence of the emperor and high priest to the Goddess of Evolution and where abducted people are taken for sacrifice. 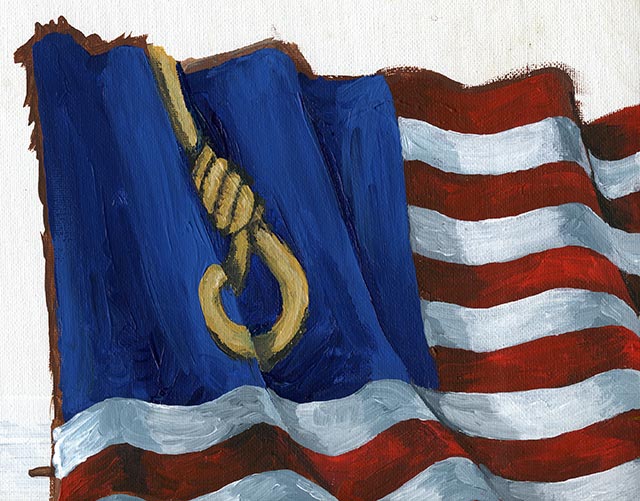 Flagpoles circled the Monument, just as I remembered, except the flags were also different. Each had a large, white hangman’s noose in the blue field instead of fifty stars.

Here’s a scan of a painting Deena made in the course of creating the hardback’s cover art. Given the current state of America, I don’t find this flag to be so far-fetched. 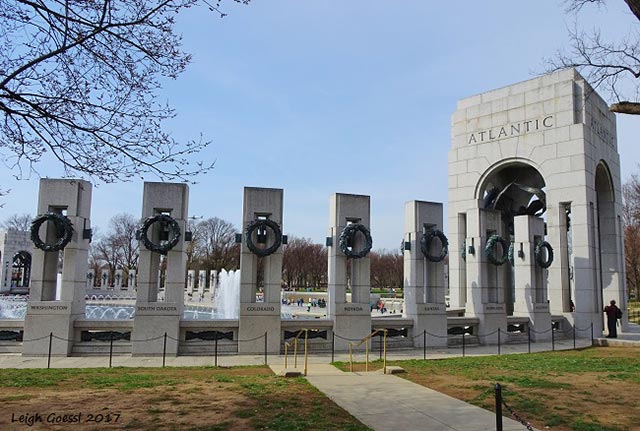 The Memorial’s stone pillars, each about twenty feet tall, partially surrounded a pond with two spraying fountains. That part looked normal. But those weren’t wreaths hanging from the pillars like I remembered. Hangman’s nooses—with actual corpses—dangled from the sides instead. … I wondered if that meant they were slowly strangled instead of suffering the quick, clean neck breaks nooses were designed for. … A couple of the victims hung by their ankles instead of their necks. That was worse. Death would take longer.

The WW2 Memorial is in a perfect location and with a perfect design for the public gallows of my story. As you know, in ancient Rome, state criminals were also executed in a slow-acting, exhibitory manner. 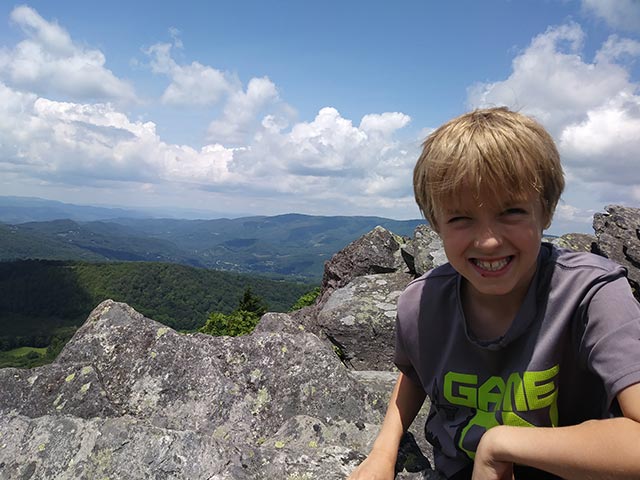 I drove four hours south to Linville, North Carolina—a beautiful, mountainous resort area I remembered from family trips growing up. On a sunny spring day, I hiked up to the Flat Rock Overlook, at an elevation of nearly four thousand feet. And it was here, so high above the world that the rolling hills of forest were like green hair follicles growing to the sky, that I hit my low point.

Here’s Owen again, a bit older than the previous picture, during a visit to Flat Rock. As described later in the book, the Lutheran ministers from Camp Linn Haven like to take Family Week attendees there for evening devotions. There are plenty of rocks to sit on, but the sun always finds the perfect angle to dagger into your eyes. Flat Rock was a suitable location for some of the novel’s major scenes, one of which is depicted on the new cover.

That’s all I have for now. Do you have any photos or artwork you would like to contribute? (I hear Pinterest is good for that, but I’m surprisingly out of touch for someone who daylights as a website designer.)

Also see:
Inspiration for Empire of the Goddess
A Tale of Two Covers
Audiobook Production Tips

Tagged Empire of the Goddess

7 thoughts on “EMPIRE OF THE GODDESS Photo Essay”