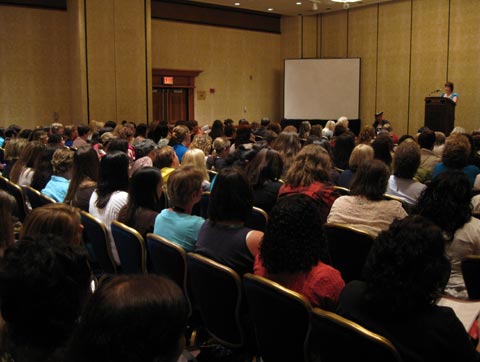 The first-timers orientation at the RWA conference on Wednesday night.

The hell business does a horror writer have at a romance writers convention? Plenty, if you want to reach a wider readership. I don’t know if it’s because males are devolving into a bunch of illiterate, Xbox-playing coach potatoes (I know I am), but there are sure a lot more female than male readers these days. Romance titles represent about 13 percent of all books sold.

So, I thought it a wise decision to write what I believed was a “paranormal romance” novel because that subgenre co-opts many of the trappings of horror. Much wiser, however, was the decision to attend the annual conference of the Romance Writers of America this week. I say that because there I learned that my novel isn’t “paranormal romance” at all.

More on that in a moment. First, let me tell you about the convention itself.

I’ve been going to conventions for about nine years, and I think this is the best-run one I’ve attended. Immediately upon arriving at the Marriott in Washington, DC, I received a goodie bag loaded with free books (complete with a huge ad for Harlequin on the side that made me feel pretty self-conscious on the subway, let me tell you), a 56-page glossy conference brochure, and a flash drive containing all the handouts from the workshops. The lariat for my ID badge came in a durable canvas carry case (I won’t say purse) complete with pockets for business cards and pens.

Of the estimated 3,000 attendees, there were about three men. So it was no surprise that most of the men’s bathrooms were converted into women’s bathrooms by means of hand-lettered signs outside and table cloths draped over the urinals inside. At the first-timers orientation Wednesday night — attended by some 500 women — the speaker gleefully said, “You can tell the men that now they know how we feel when we go to a stadium ballgame.” By the way, they had a door-prize drawing at that meeting for pink soap. Guess who won the soap. Yep.

The convention provided breakfast and lunch on two days. The food was excellent and served by an army of waiters. I ate in ballrooms so large that images of the keynote speakers had to be redisplayed on large-screen TVs throughout the space. The speakers included several bestselling authors such as Janet Evanovich, Linda Howard, and Eloisa James. And of course every time I sat down at one of these functions, I had to move aside the mountain of free books waiting for me. I enjoyed the talks very much. I can just tell by her covers that Eloisa James isn’t my cup of tea, but she sure is an excellent speaker, and the same goes for Janet Evanovich. It’s inspirational to hear that somebody so successful used to be right where I am: clawing my way up, dealing with rejection and self doubt, and every day digging down to the find the courage to soldier on. Evanovich admitted to once giving up on writing after years of dealing with rejection, only to finally receive her first acceptance months later.

If I’m counting right, there were 145 workshops or discussion panels within three days. Most were taped and will be available later on CD-ROM and for download. I could always find the right conference rooms thanks to plenty of maps, volunteers, and signs. The topics were all the usual stuff I’ve been hearing for years at conventions, but a couple panels stood out. First was the one on genre distinctions where I had the revelation that my manuscript isn’t a paranormal romance title after all but an “urban fantasy,” of which examples are True Blood (based on Charlaine Harris’ Southern Vampire series) and Buffy the Vampire Slayer. Although there’s some crossover, there are important differences at work. They have separate agents, publishing imprints, and shelving categories. They also have different reader expectations. For instance, it’s okay for the hero and heroine not to have sex within the first hundred pages of an urban fantasy story. For a paranormal romance, it’s not so okay. I’m not going to say much more about the genre theory right now because obviously I’m not an expert on it. What’s important is that I’ve found a new target niche for my writing, and now I’m aware of a whole group of other writers whom I now need to read. 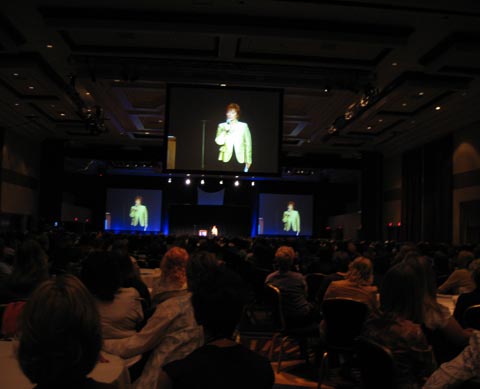 Janet Evanovich speaks at the opening session on Thursday morning. Holy estrogen, Batman; that is a lot of women.

The other workshop I especially enjoyed was where writers were invited to hand in the first two pages of their novels to have them judged on the spot by a panel of Harlequin editors. Two of the editors’ pet peeves are having a character’s full name within the opening few words of the novel (“That’s valuable real estate,” they said; “Is that really your most important piece of information?”), and having the opening scene be the protagonist driving somewhere, by herself, thinking about stuff. I guess these peeves go in the same category as having your protagonist look at herself in the mirror so she can describe herself. In an hour, they didn’t have time to get to my submission, but I think I learned enough to guess what they would have said.

Another thing that set this convention apart were the editor-agent pitch meetings. A sea of individual conference tables — one per agent or editor — filled a huge, Artic-temperature basement. Two sign-in desks regulated writers checking in for appointments and writers hoping to sign up for appointments. The pitch meetings lasted for two days, ten minutes each. I knew on Friday that I had an agent appointment at 9:20 a.m. Saturday, and damned if it didn’t start precisely at that time. At 9:10, an organizer lined up the 9:20 appointments in the corner, arranging us into three lines and telling us exactly where to stand based on whom we were meeting. Most of us laughed and felt like we were in the Marines. At 9:20, an announcer told us to start the next appointments, and we hurried to our tables. Fortunately, I had an excellent appointment.

“So, your hero and heroine don’t have sex until the end of the story,” the agent told me. “That’s a problem for a romance title.”

“But this is urban fantasy.”

She asked me to email her the first ten pages and a synopsis. “I hope they’re good pages!”

Being a man at a romance writers conference certainly made me stand out, but it was a welcome ice-breaker because I truly didn’t know a soul beforehand. I now have a handful of business cards, plans to upgrade my membership, and some new friends. One of the funnier exchanges came on Friday night at the bar. I asked a group of women why, in every romance novel I’ve read, the author seems to think it’s so important to describe a character’s eye color. It seems so cliched to talk about someone’s amber eyes flashing, or hooded eyes, or even brown or blue eyes doing this or that. I mean, who gives a shit? When I meet someone new, I’m not looking at their eye color. It’s the smallest thing about their appearance. I’m noticing body build, clothing, hair style, mannerisms, and personality.

After saying this, I sure found myself noticing these women’s eyes because they were rolling them. They laughed and said they simply could not believe I didn’t feel eye color is important. “If you’re going to write for women, you need to write about eye color,” they said, and all but appended this with, “moron!”

I wrapped up the conference by attending a panel on time management. I’ve always thought I have excellent organizational skills, but with a baby on the way (Deena thankfully didn’t give birth this week), I know my skills will have to be sharp. So it’s good that this conference gave me a swift kick in the butt at just the right time. It reminded me that writing is more important to me than playing with the Xbox and that if I want to be a successful writer, then I have to treat it like any other job.