On Mentoring and Staying Humble 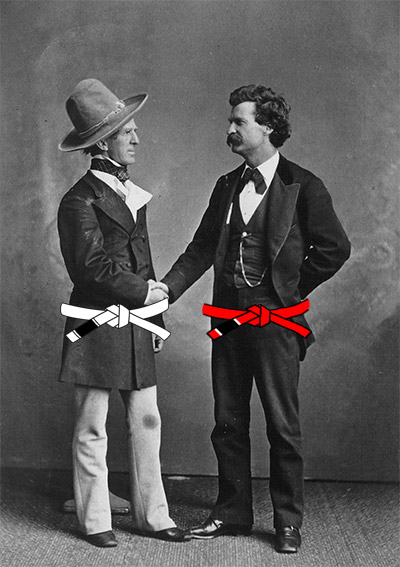 Made two choices in the past week — three, if you count my new commitment only to write in sentence fragments.

The first is to sign on as an official mentor in the Horror Writers Association. I’ve been paired with a beginning writer, whom I’ll advise for the next year.

The second is to return to the Borderlands Boot Camp for Writers in 2016 as a student/grunt. The last time I attended as a paying student was 2005. I’ve returned several times since then as a guest “dramatic reader” for Sunday writing exercises.

I’ve been submitting for professional publication now for 25 years. Does that make me qualified to hold forth to my HWA mentee, who is eight years older than me? If yes, then why return to a workshop conference normally populated with writers who’ve only had a few years of professional experience?

Oddly, you might say, I credit my newfound passion for the Brazilian Jiu-Jitsu martial art with guiding me through this. In BJJ, there’s an unstated distinction between talent and experience. Talent is that thing you bring to the mat: it’s inborn, you have no control over it. You might genetically be a jiu-jiteiro genius, and you might not. But whatever talent you have won’t emerge without experience. Experience is signified through the belt-rank system. White belts are still learning their basic skills. Blue belts have learned the basics. Purple, brown, black, and the legendary red belts have progressively customized those skills to themselves as individual artists.

I now look at the writing craft the same way. I don’t necessarily have more talent than the guy composing his first short story. He might have more. But what I do have is experience. He’s a white or blue belt, and by virtue of how I’ve spent my time, I’m a black belt. That’s what gives a black belt its color, after all: the grime of work.

With this metaphor in mind, I return to the writing craft with a more humble and generous mindset. As an HWA mentor and an informal mentor to some other friends and family members, I understand these writers may have just as much or more talent than I do. But I still have things I can show them. Paradoxically, this means I teach myself; it’s a truism that you don’t learn a skill until you teach it. It’s only at that point that you examine what you do and why you do it that way. I’m also helping others because I have mentors like Thomas Monteleone, who runs the Borderlands Boot Camp. As he’s told me, he has had mentors, too, and now he feels an obligation to give back.

As for returning to the Boot Camp as a paid participant, I equate it to the fun prospect of attending a particularly good black belt seminar hosted by Leo Dalla. This is a chance to study with writers who’ve earned their fourth- and fifth-degree black belts, so to speak, who’ve been around much longer than I have, and who can help me refine my skills. Even people who’ve been at it 25 years have something to learn. And along the way, I’ll benefit from that teaching-to-teach-myself blowback effect mentioned above. I’m doing it because I love the writing craft, and I can think of few weekends more pleasurable than sitting around analyzing plot and character development with like-minded folks.

Why am I doing these things? Because I finally have the right perspective on who I am and where I am.

Now if I can just land that literary agent.

2 thoughts on “On Mentoring and Staying Humble”